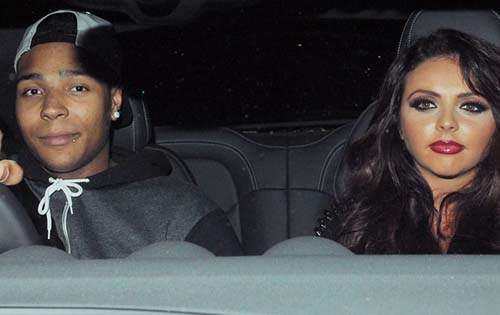 As a couple who have been dating for over two years, Little Mix’s Jesy Nelson and Diversity’s Jordan Banjo are used to spending their free time together. However, on Saturday, they mixed business with pleasure as the pop group and the dance troupe teamed up for a special performance for the Britain’s Got Talent live final.

Exiting the Fountain Studios in Wembley, West London, following their joint set, the young couple stayed close to each other as they left holding hands. Saturday’s performance saw Diversity kick things off with an energetic dance routine, before pausing to allow Little Mix to enter the stage singing their new single Salute. The group then put singing on hold as they joined Diversity for a dance sequence.

Talking to BGT co-hosts Ant McPartlin and Declan Donnelly after their performance, Diversity star Ashley Banjo admitted they were thrilled to do the ‘dance duet’ so they could ‘help out the girlfriends’. Jesy Nelson bandmate Jade Thirlwall is dating Jordan’s Diversity team-mate Sam Craske. Jesy said in a recent interview: ‘The boys haven’t really seen us. But they’re good, they get it. ‘Mine and Jade’s boyfriends are both on tour with Diversity as well, so they understand the pressures. We’re all used to it.’

Jade recently admitted all the group’s boyfriends were banned from their tour bus because they were a ‘distraction’. She told The Sun: ‘There’s no sexy time. There’s no room for boyfriends – they’ve been banned and are not allowed to stay on the bus.’ Jesy Nelson and Jordan started dating in spring 2012, but were reported to have split in March 2013. However, by May that year, the couple showed they were very much together again as they posted a selfie taken in bed.