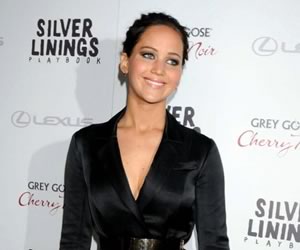 Jennifer Lawrence thinks she is “vastly uneducated” The ‘Silver Linings Playbook’ star – who was nominated for an Oscar in 2010 for her performance in ‘Winter’s Bone’ has zero time for self-obsessed celebrities and has admitted she believes acting is “stupid”. The 22-year-old newly brunette beauty told the February issue of Vanity Fair magazine: “Not to sound rude, but [acting] is stupid. Everybody’s like, ‘How can you remain with a level head?’ And I’m like, ‘Why would I ever get cocky? I’m not saving anybody’s life. There are doctors who save lives and firemen who run into burning buildings. I’m making movies. It’s stupid.”

But despite being underwhelmed by life in Hollywood, the actress admitted that she does sometimes still get starstruck. She said: “Once I’m obsessed with somebody, I’m terrified of them instantly. I’m not scared of them – I’m scared of me and how I will react. Like, for instance, one time someone was introducing me to Bill Maher, and I saw Meryl Streep walk into the room, and I literally put my hand right in Bill Maher’s face and said, ‘Not now, Bill!’ and I just stared at Meryl Streep.”

‘The Hunger Games’ star Jennifer Lawrence previously revealed her New Year’s resolution is to stand up for herself more. She said: “My New Year’s Resolution is to stand up for myself. It’s hard for me. Nobody wants to be disliked. You always want to be polite and be nice. I tried to find a balance in saying what I mean and still being nice. I can’t do it. I have this ‘okay’ attitude and everything. I end up allowing myself to get walked over and resenting it.” – Femalefirst