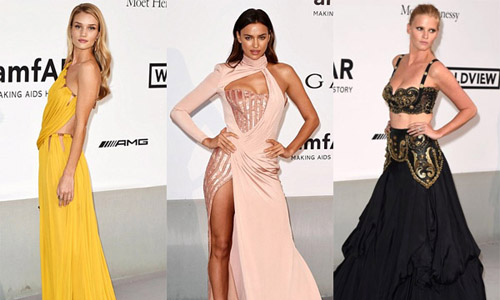 They have so far been a staple at the majority of premieres during the 67th Cannes Film Festival. And on Thursday evening the models were out in force once again as they attended the annual amfAR Cinema Against AIDS gala held at the famous Hotel du Cap-Eden-Roc.

Leading the leggy beauties was British model Rosie Huntington-Whitely who looked like a Grecian goddess wearing a flowing yellow Emilio Pucci autumn/winter 2014 gown featuring cut-out detail around the waist and neckline. As Rosie, 27 , turned around the revealed her open back with chain detial, that helped give the bright gown an added touch of drama for the prestigious event. Irina Shayk also opted to show some skin wearing a pale pink Atelier Versace dress which was draped over a sequined bodice, revealing not only her cleavage but also her long tanned leg. The slightly bizarre dress featured a high neckline, with just one sleeve, creating a semi modest look for the Russian model, who is dating Ronaldo. Lara Stone, who is married to Brit comedian David Walliams, appeared to take inspiration from a belly dancer wearing a vintage Gianni Versace stunning gold and black bra bodice and a full skirt.

They weren’t however the only models in attendance, in fact the event appeared to overrun with the glamorous well known faces of the catwalk. Barbara Palvin, who was seen partying with Justin Bieber the evening before, looked as fresh as ever wearing a stunning black gown with sheer skirt and plunging neckline. Her look was in contrast to fellow Victoria’s Secret model Karlie Kloss,  who kept her famous figure hidden beneath a twenties inspired beaded frock and a pair of flat sandals. Another Angel Alessandra Ambrosio went for a truly angelic look – a white gown with a pleated skirt and plunging neckline, as well as sparkling strap details. Sports Illustrated star Jessica Hart showed off her figure wearing a pale mint dress with a high neckline and ruched waistline section. Her hair was styled naturally creating a surfer girl look. British socialite Tamara Ecclestone, who recently gave birth to her first child, went for a fun leopard print detail dress which revealed her tiny waist as she posed with husband Jay Rutland.

It was a romantic evening out for Hollywood actor John Travolta as well, who was accompanied by his wife Kelly Preston who stood out in a sexy lace dress. Also from across the pond came Michelle Rodriguez, who ditched her tomboy style for the evening in favour of a plunging black dress with a sequined cut-out bodice. The actress, who wore her hair off her face, arrived in Cannes as Cara Delevingne flew out – leaving speculation rife about the state of their relationship. Pop princess Kylie Minogue defied her years wearing a pale rose coloured gown which was low-cut and featured a tie detail as well as thigh high split.  Making it a touch more casual she wore her  in loose curls and added a pair of hoop earrings.

Despite being surrounded in the world’s top models, 56-year-old Sharon Stone managed to turn heads wearing red – the shade synonymous with AIDS causes, which the charity raises money for. However, the iconic blonde turned up the heat, as while the dress by Roberto Cavalli was floor length and long sleeved, it still managed to show off plenty of her famous figure. Featuring a flowing long skirt the gown was very conservative at the bottom but then, at the waist, it had enormous embellished round cut-out sections showing off the movie star’s stomach but she  was not done there, as the dress also had a keyhole cut-out on her chest. Another stand out look came from Conchita Wurst, the Austrian bearded drag queen who won the Eurovision Song Contest earlier this month, is enjoying her newfound fame. ‘I love this. This is the life I always wanted.

So it feels really great,’ Wurst said, dressed in a sparkling blue evening gown. Wurst – the alter ego of 25-year-old Thomas Neuwirth – said she’s hoping to go even further in the music business after years of appearing on television in two reality shows and another talent show in 2011. ‘I’ve not been invited to the World Music Awards although I’d love to. Maybe next year.  I want to record an album and I have to make more music,’ she said. Famed British artist Damien Hirst has created a gilded woolly mammoth skeleton encased in a gold tank to be auctioned off at the annual gala. Titled Gone but not Forgotten, the three-meter mammal joins Hirst’s famous shark in formaldehyde and bisected cow in his Natural History series. The one-of-a kind piece is expected to raise millions of dollars for the charity’s work in the fight against AIDS. Past auction items have included a trip to space with Leonardo DiCaprio and a kiss from George Clooney. Held at the Hotel du Cap-Eden-Roc, the amfAR gala is one of the highlights of the Cannes Film Festival attracting support from global stars such as Sharon Stone, Heidi Klum and Aishwarya Rai.

This year’s guest list includes Jessica Chastain, Berenice Bejo, Adrien Brody and Robin Thicke, who will perform at Thursday’s event. Later that evening, there were performances from Aloe Blacc, Lana Del Rey and Robin Thicke who wowed then they took to the stage. Justin Bieber was pictured posing for snaps with Video Games singer Lana as well as supermodel Heidi Klum. Meanwhile, Sharon Stone delivered a speech on stage to rapturous applause and shimmered in a metallic gold dress. Leonardi DiCaprio, currently dating Victoria’s Secret model Toni Garrn was seated next to French actress Marion Cotillard while Nicole Scherzinger could barely keep her hands off her Formula One beau, Lewis Hamilton. -dailymail