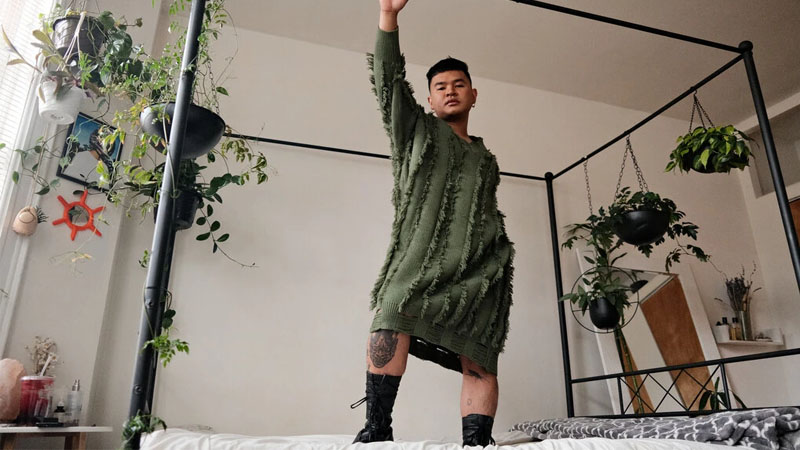 It seems fairly unlikely that when Irwin Shaw wrote “The Girls in Their Summer Dresses,” his classic paean to “a million wonderful women, all over the city,” drifting along the pavement as warm breezes tugged at their hems, he could have envisioned a day when those “girls” would as likely be men. Sexist and dated as Shaw’s much anthologized 1939 story may be, it did lay out truths about urban existence and the unalloyed joy of looking.

Those pleasures, largely withheld over the last 16 months, have returned as we venture forth from our caves. To the delighted surprise of at least one observer, a considerable number of us apparently used the time in confinement to rethink some shibboleths about who gets to wear what.

Khoa Sinclair, for instance, treated lockdown as a time of experimentation, a chance to push a style already liberated from rigid binary conventions into the realm of “next-level femininity.”

So there was Sinclair, 26, on a recent warm afternoon sauntering through Domino Park in Williamsburg, Brooklyn, slick forelock curled in an anime flip, inked arms emerging from the sleeves of a sinuous Issey Miyake pleated dress.

“For the longest time, people were so stuck on being one way or the other,” Sinclair said, referring to waning gendered dress codes. “Queer people have been playing with this for a long time. But now you see a lot of guys in dresses that don’t identify as all that feminine.”

You see the hip-hop eminence and tastemaker ASAP Rocky clad in a Vivienne Westwood kilt on the cover of the latest GQ. You see Madonna’s 15-year-old soccer-player son, David Banda, gliding down a long hallway in a viral video while dressed in a white silk floor-length Mae Couture number that he says is “so freeing.’’

You see a wave of male teachers in Spain come to school wearing skirts in support of a student expelled from class and forced to seek counseling after wearing one. You spot Lil Nas X on “The Tonight Show” in a long tartan skirt — a manly symbol in Scotland, though in few other places — and Bad Bunny at the Grammys in a Burberry coat worn over a classic black Riccardo Tisci tunic resembling a nun’s habit.

You observe, on a recent balmy afternoon in Washington Square Park, guys dressed variously in a tattered frock reminiscent of Kurt Cobain’s 1993 cover of “The Face”; a plaid Britney Spears schoolgirl mini; and a cap-sleeve blouse and skirt set, also from Miyake, accessorized with black ankle socks and patent leather lug-sole shoes.

“I started out wearing feminine tops and then feminine bottoms,” Robert Saludares, 24, an aesthetician who grew up picking coffee beans on a farm in Hawaii, said of his Miyake outfit. “Now, honestly, I just shop the women’s department.”

If the streets are the ultimate proving ground of societal shifts, they do not always lend themselves to easy statistical measurement. For that there is the internet. Searches for fashion pieces that include agender keywords increased by 33% since the beginning of the year on Lyst, a global fashion platform that aggregates data from 17,000 brands and retailers. Page views for feather boas spiked 1,500% after Harry Styles wore one to the 2021 Grammys. Within 24 hours of Kid Cudi’s April appearance on “Saturday Night Live” in an Off-White sundress, the label’s site recorded a 21% increase in searches for similar items.

“When we started seeing male celebrities wearing skirts a lot more, we said, ‘Let’s try and do a skirt edit in the men’s section of our app,’” Bridget Mills-Powell, Lyst’s chief content officer, said by telephone from London. “We kind of didn’t believe it would perform that well, but then we got really high engagement, higher than for our other lists.” Reposted to Instagram with an image of Lil Nas X, the Lyst skirt edit “blew up,” she said.

It has been nearly two decades since Andrew Bolton, the curator in charge of the Costume Institute of the Metropolitan Museum of Art, mounted a farseeing exhibition titled “Brave Hearts: Men in Skirts.” And, while cultural anthropologists like Bolton were early to detect the kinds of cultural shift that often turn up first in fashion, even he may not have foreseen a time when two male characters on an Emmy Award-winning series would get married on air with one of them dressed in a skirt, as David Rose (Daniel Levy) and Patrick Brewer (Noah Reid) did on “Schitt’s Creek’’ in 2018. (Coincidentally, the skirt was from Thom Browne, a pioneer of post-gender dressing, and also Bolton’s boyfriend.)

Somehow, in the years since the 2003 Met show, our eyes have adjusted to images that may once have shocked us, like that of British comedian Eddie Izzard — a lifelong cross-dresser (who last year began using “she/her” pronouns) who once remarked on a British talk show that there was nothing inherently feminine about her outfits: “They’re not women’s clothes,” Izzard said, in what may be her most famous utterance. “They’re my clothes. I bought them.”

In a video posted to promote the June issue of GQ, hip-hop artist ASAP Rocky similarly takes aim at stereotypes, talking about the pink furs, pink Loewe suits and pink diamonds he often flaunts on red carpets and in the front rows of fashion shows. “To be able to have that comfort wearing something that’s considered to be feminine,” he said, “that shows masculinity to me.”

Besides, our clothing can no longer automatically be considered a “tell” for anything, as it was in repressive eras when, say, closeted gay men were forced to signal their sexuality to each other through the kind of coded sartorial gestures that gave rise to slurs like “queer as Dick’s hatband.”

“We’re rethinking all of that,” said Will Welch, editor of GQ. “A guy in Allbirds and a hoodie might be a billionaire. So you can’t make assumptions anymore,” not least about the gender orientation of “those kids in Washington Square Park in dresses.”

For 30-ish fashion stylist Mickey Freeman, who has eschewed trousers for some six years, a kilt is a tool for flouting societal constrictions on what constitutes Black male identity. “Most people have an internal directive of how clothes play into a man’s masculinity,” Freeman wrote in an email. Guys looking to loosen “the internal shackles” of gender presentation may benefit from giving a test run to wearing a garment created without two legs and a zipper.

And for Eugene Rabkin, 44, a fashion journalist who last year posted a tale to StyleZeitgeist, his popular online magazine, titled “How I Stopped Worrying and Learned to Love Women’s Clothes,” this process was rooted in comfort and aesthetics, not gender discovery. (As, indeed, it is in large parts of the non-Western world, where men are as likely to be seen in tunics, dhotis or lungis as in trousers.) When Rabkin, who pointedly identifies as cisgender and heterosexual, bought his first item of “women’s” attire in 2003, his uncontroversial selection was a pair of Ann Demeulemeester combat boots Nicole Kidman had worn in the September issue of Vogue.

“To me, there is nothing particularly feminine about them,” Rabkin wrote, referring to the skirts and tunics and other garments he has since acquired from the women’s collections of designers like Rick Owens, Raf Simons and Jun Takahashi. “What I am doing when I am buying women’s garments is not some transgressive gesture of rebellion about conservative societal norms.”

Out shopping with his wife for basics at Uniqlo, Rabkin once found himself in a dressing room adjusting the waistband on a quilted skirt she had tried on unsuccessfully and then suggested would look better on him. It did.

Another option, one that is perhaps too little appreciated, is the notion of treating clothes as opportunities for play. Three years ago, when Brendan Dunlap, 24, was a junior at Whitman College in Walla Walla, Washington, he began questioning the sometimes arbitrary-seeming binary division of clothing departments. “A lot of gender rules just don’t make sense to me,” said Dunlap, a substitute teacher in San Francisco. “If I love self-expression, how is the entire world of women’s clothes and women’s fashion not available to me as a man?”

Starting at a “Rocky Horror Picture Show” screening he attended in a blue wig and high heels, Dunlap embarked on what he termed a “slow moving, steady journey” from what at first was a stunt and that later became a joyful daily practice.

“I now dress completely for fun,” said Dunlap, who identifies as a queer man and who serves as an actual poster boy for gender fluidity as part of this year’s Levi’s “All Pronouns All Love” Pride campaign.

“It was a serious life hack to discover that we can make our own rules,” Dunlap said, noting that the freedoms he enjoys may not be available to all. “I have a certain amount of body privilege as a tall, thin white man who is conventionally attractive.”

Still, there is something refreshing about a cultural pivot point that allows for someone like Dunlap to wear jeans and sneakers when the mood strikes or else, “to wear the shortest mini I have and the highest heels to go out to the grocery store.”

Megan Fox Has Worn These Confusing Sneakers at Least Once a Week, and We Don’t Get It