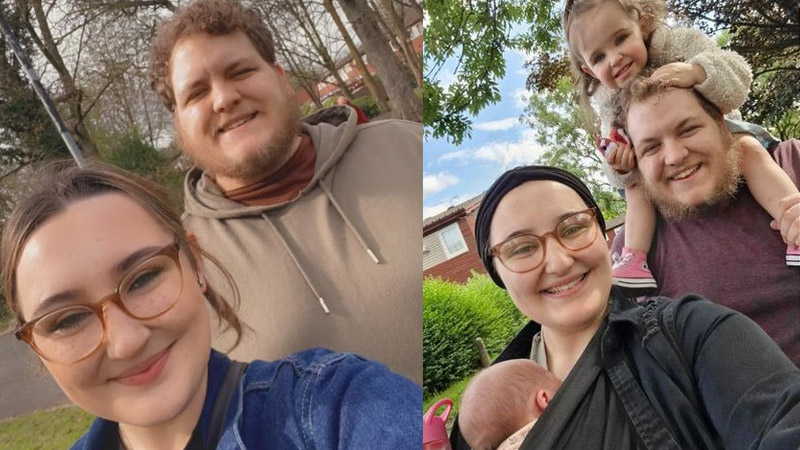 An inquest has found that a baby girl died after being stuck between a footstool and a couch in a terrible accident. Cassidy Blossom Oakley, six weeks old, was discovered unresponsive around 11 p.m. on September 5, last year.

On Wednesday, an inquest into the baby’s death was held in Warrington, where her heartbroken parents paid tribute to their daughter. In a statement read aloud in court by Jacob and Cassidy’s mother Megan, they described Cassidy as their “bright, blue-eyed baby girl.”

Cassidy was told at the hearing that she was a twin but was the only survivor of an earlier miscarriage. According to the Echo, her parents wanted to give her “the best start in life” and described her as their own Merida, the princess from Disney’s Brave.

The hearing heard how on the day in question Cassidy had fallen asleep at around 9.30 pm and was being watched by her dad. Megan said: “I went up to bed shortly after. I said my usual ‘goodnight, I love you, sweet dreams princess.

“I gave her extra hugs and kisses and was next awoken at 11 pm with Jacob shouting my name begging me to help him.” Jumping out of bed “confused”, she “soon realized how serious the situation was” when she saw Cassidy, limp and not breathing, in her dad’s arms.

The hearing was told they attempted CPR until paramedics arrived and she was soon rushed to Warrington Hospital. Megan added: “Our baby girl could never have rolled over by herself, she was only six weeks old. We can imagine what is going through your mind when we say she was on a footstool.

“To elaborate, it was a footstool part of the couch and there was no way she could’ve rolled off. It was in the corner of the room and she was lying on a baby pillow, the intention was not to keep her there. Sadly my partner shut his eyes and unintentionally fell asleep. If you all have children you know how exhausting it is.”

Cassidy regained a heartbeat despite the best efforts of her parents and paramedics, but she was not “breathing responsively.” Cassidy’s heart “wasn’t coping well,” according to her parents, and, “doctors said it didn’t look too good.”

Concerns were raised that there was a failure in communication from the start as a “human error” from control meant CPR advice was given to her parents for a young child rather than a baby. Jacob said: “It’s awful that it’s been (seen as) a learning opportunity when my child had to die.”

Dr. James Wallace of Warrington Hospital, on the other hand, believes that the CPR technique would have made no difference because the important thing was that it was “done.” Cassidy had a pulse but was not responding when she arrived at the hospital, according to him, and her pupils were fixed and dilated.

Cassidy had a second cardiac arrest, which was likely caused by low oxygen levels, according to the testimony at the hearing. Cassidy was eventually stable enough to be transferred to Alder Hey, and the inquest heard that she was only taking “occasional raspy breaths” and had “catastrophic brain damage.”

Her parents said they stayed by her side after she arrived around 5 a.m., and other family members recorded messages to be played for her. However, her devastated parents were the following day told their baby girl was “brain dead”.

The inquest was told of a suggestion Cassidy could have “jolted” off the seat following a potential heart attack as mum Megan said she could not have “rolled over three times” alone.

Assistant coroner Heath Westerman concluded that the ambulance service’s advice to start CPR on a one- to seven-year-old rather than a one- to seven-week-old “made no difference,” and that everyone else did their best for an outcome that “sadly did not materialize.”

He went on to say there were “no pathological findings to explain Cassidy’s passing” and there was no evidence of heart defects or seizures causing her to die. On Cassidy’s positioning, he added: “I can’t speculate as to whether she ended up there by her own movements or those by her father who was asleep next to her.”

Given a cause of death as asphyxia due to being found wedged between a sofa and a side wall, Cassidy’s death on September 9, 2021, was recorded as an accident. The coroner said: “I’m so deeply sorry for your loss as a family, but in particular Mr. and Mrs. Oakley and the suffering you’ve all been through, I can’t begin to imagine what that must’ve been like.

“I only hope you eventually come out of that process able to remember Cassidy with fondness rather than the manner in which she sadly passed away. My heart goes out to all of you.”