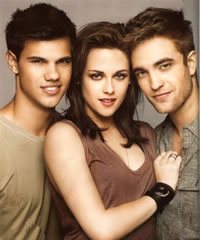 The famous Jacob of ‘Twilight’ series, Taylor Lautner talks about the final day of filming “Breaking Dawn”. He says the day was emotional.

Taylor Lautner is too friendly and sweet and has become close friend of Robert Pattinson and Kristen Stewart while shooting ‘Twilight’ series with them. During an interview on the premiere red carpet of his latest film ‘Abduction’, Taylor Lautner revealed his emotions on the last day of filming “Breaking Dawn” with Robert Pattinson and Kristen Stewart.

Taylor Lautner explains, “The big moment for me was the second-to-last day of filming, because that was my final scene with Kristen and Rob. It was an emotional scene we were filming, so that really didn’t help, but it was tough and it’s a very weird feeling to be done filming.”