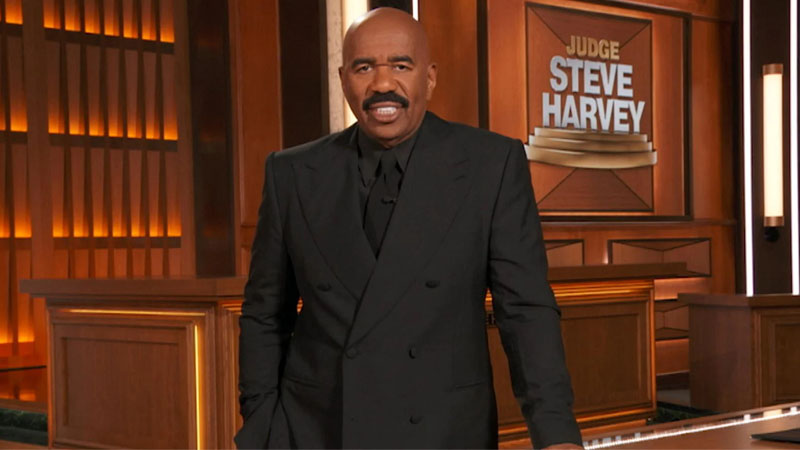 Gossip Cop looks into the latest rumor. Marjorie Harvey Finds Steve ‘Annoying’ After She Loses Weight? According to this week’s issue of the National Enquirer, alleged “horndog” Steve Harvey is feeling better than ever after losing 30 pounds in the last few months, but his wife, Marjorie, isn’t delighted with her husband’s new outlook on life.

“At first it was fun, but she’s had enough.” The tabloid says Steve has been “acting like a newlywed” following his weight loss, but that his wife of nearly 15 years has had enough. “His libido is through the roof, and poor Marjorie’s asking for a break,” the tattler sniffs before adding, “He’s always been a frisky guy, and he wants more romance time than she can manage.”

Despite his wife’s apparent misgivings about his renewed libido, Steve is said to be the cock of the walk.

“After losing all that weight Steve is a changed man. He proudly declares himself a big hunk of burning love.” Pro Weight Loss, Against ‘Horndog’ Behavior “Marjorie thinks it’s great that he feels good and is keeping the weight off,” the source concludes, “but his behavior is getting a little annoying. She doesn’t need more lingerie from him either. Sometimes she’d just like a new appliance!” Yes, the two acceptable gifts to give your wife are lingerie or an appliance.

What century does the Enquirer live in where this kind of old-fashioned sexism is not only approved by an editor but also published? The Gossip Cop’s Opinion On This Idle Rumor We won’t stoop to the Enquirer’s level and speculate about the Harveys’ sex lives, but we will say that it’s a complete myth that female sexuality fades after the age of 50.

Cultural norms and misconceptions, which the Enquirer is guilty of justifying, keep older women from experiencing the full strength of their sexuality as they age. Steve Harvey, have you lost 30 pounds? It’s obvious that he’s lost weight, but we’re not sure where the tabloid got the “30-pound” figure.

Essence published an article in 2020 claiming that the popular TV host had lost 30 pounds, but it cited information from 2007. A Recurring Theme in the Tabloids We’d also like to point out that the Enquirer has a habit of speculating on celebrity weight gain and loss, always claiming that the difference is between 20 and 50 pounds.

In recent articles, Tom Cruise and Whoopi Goldberg were also said to have “packed on” the pounds, according to the outlet. Its sister publication, the Globe, frequently publishes celebrity weight-based stories that fall squarely into those parameters as well, as seen in these articles about Luke Bryan and Elton John, where “Lardy Luke” gained 40 pounds and “emaciated” Elton John lost 30 pounds.

Little Mix’s Next Single Is Reportedly About Zayn Malik