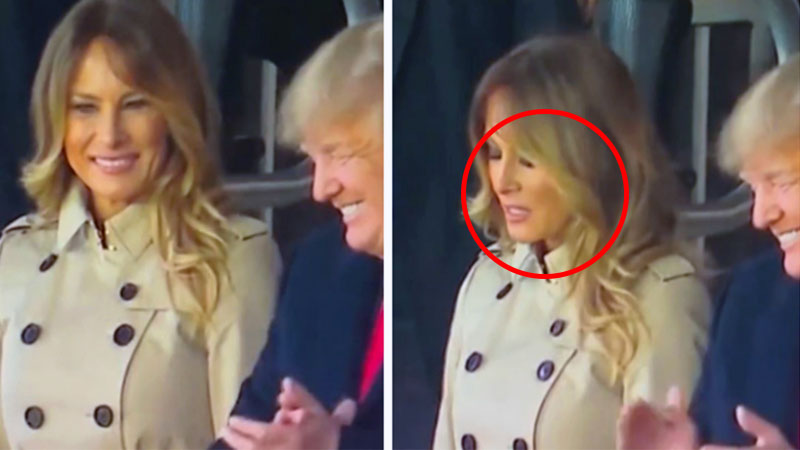 Donald Trump may no longer be President of the United States, but he is still making news. Today’s headlines, though, are all about his wife, Melania, who was caught on video giving Donald the eye roll of all eye rolls at their first public appearance since April.

Melania can be seen smiling and waving to the audience at a World Series baseball game in a now-deleted clip on Twitter, which apparently received over four million views. But, within seconds, Melania’s smile fades and she throws a major eye roll towards her husband. To be honest, the scene can only be defined as iconic.

Despite the original video is no longer being shared, there are still plenty of other clips circulating on Twitter. “Did Melania give Trump that looks again?” tweeted one person, as another added “Melania Trump doesn’t care anymore. Seems like her shift ended at 4:00 pm & it’s 4:01 pm.”

A third person tweeted “How many times cameras gonna catch Melania doing [sic] this to Trump???” with a fourth person saying “Watch the scorn and disgust Melania gives to Trump as she turns away from him, in their first public appearance together since April. In fact, it’s so delightful, watch it over and over again.”

However, this is not the first time the former First Lady has been caught on camera apparently dissing her husband though. Another video of Melania looking as if she’s blanking Donald was making the rounds on Twitter earlier this year.

The footage, which was seen on US tv, shows the pair arriving in Florida after leaving Washington, DC. Donald touches his wife on the lower back as the couple emerges from the stairs of the Marine One helicopter before stopping and waving to the cameras.

As if that wasn’t enough, Melania was caught giving her husband the cold shoulder again a few years ago. In the video, the then-President attempted to convey to his wife that he wanted to hold her hand by tapping her repeatedly. But, in true Melania style, she just ignored his obvious attempt.

Biden Administration considering giving $450,000 per person to immigrants separated at the border

Reese Witherspoon hints at divorce after jogging without her wedding ring: Rumor