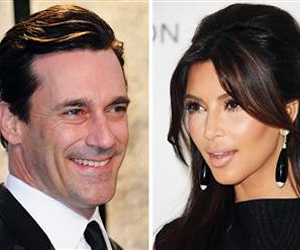 Jon Hamm and Kim Kardashian’s tussle is not ending. Just when everyone thought it was over Jon Hamm came forward with more comments in which he defended his verbal attack on Kim Kardashian. Initially Jon called Kim a f*****g idiot and he said that Kim’s popularity is all about being stupid and being popular for that.

Jon Hamm is the Mad Men star. He did not back out after the entire drama and said: “I don’t think they were careless; I think they were accurate. It’s a part of our culture that I certainly don’t identify with, and I don’t really understand the appeal of it other than in a sort of car crash sensibility.

And it’s not something that I partake in or enjoy, but it is what is and here we are. There are a lot of channels on the dials and those channels need to be filled up with things: It’s different strokes for different folks.”