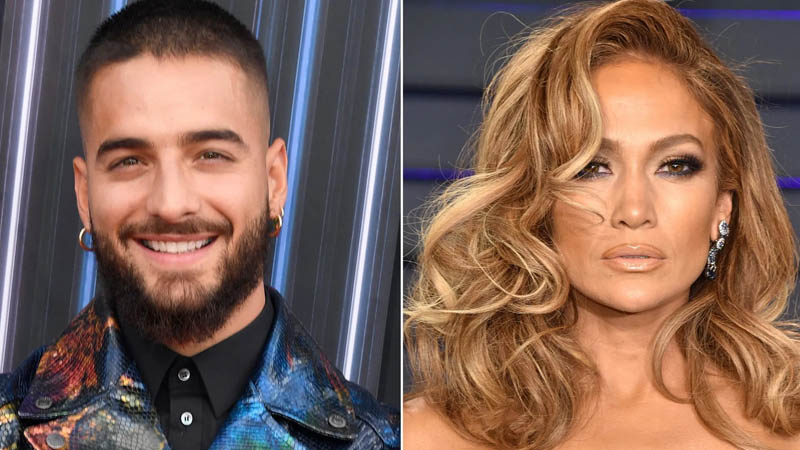 Jennifer Lopez and Maluma are making music together! The stars took to Instagram over the weekend to share pics from their studio session together. It’s not clear when J.Lo and Maluma hit the studio together, but the pair did collaborate on an album for their upcoming movie, Marry Me.

“There’s a whole — all new songs and all new music with it. So it’s exciting…I think I have like six or eight songs and Maluma does two or three,” Lopez revealed on The Tonight Show Starring Jimmy Fallon in February.

When asked if there is a tour that would go along with this album, the singer replied, “Maybe? The Marry Me Tour? You know what? I could do that,” she said, before adding, “But not this year. Not this year.”

Marry Me follows Lopez, a pop star, who, moments before marrying her rock-star fiance (played by Maluma) at Madison Square Garden, finds out he was cheating with her assistant and spontaneously picks a random math teacher (Owen Wilson) out of the crowd to marry instead.

Maluma gushed to ET about working with Lopez on the film last year. “It’s been an amazing month, actually. I’ve been here in New York for two or three weeks shooting the movie with Jennifer,” he said. “It’s been such an amazing experience also working, doing music. I mean we never stop.

Maluma previously told ET that he was waiting for the right role to get started in Hollywood.

“I would love to [act]. It’s just that everything comes at its moment,” he said in May 2019. “Then, with God’s help, I will look for opportunities to act. But if I do it, I would want to do something big. To do something in Hollywood, something that represents a big movement. At the moment, I’m focused on my musical career.”

Brad Pitt and Angelina Jolie to Wed This Summer