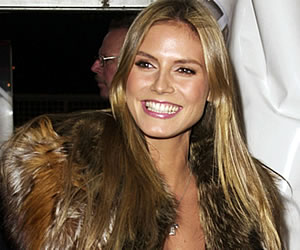 Heidi Klum has signed on to be a judge on ‘America’s Got Talent‘. The German supermodel has reportedly inked a deal to become a fourth judge on panel alongside Howard Stern, Howie Mandel and Mel B on the reality TV show. According to gossip website the 39-year-old beauty, who has four children with her musician ex-husband Seal – agreed to appear on the popular series after last minute negotiations.

The ‘Project Runway’ host jumped on a plane to New Orleans on Sunday (03.03.13) in time for the first taping of auditions for the show, which begin on Monday (04.03.13). Heidi’s signing comes just a week after former Spice Girl Mel B, 37, confirmed she will take over from Sharon Osbourne this season. Sharon quit the panel last August after accusing NBC of “discrimination” against her son Jack, who was allegedly axed from its other reality show ‘Stars Earn Stripes’ after he revealed his multiple sclerosis (MS) diagnosis.

‘The Talk’ host previously insisted Heidi Klum will continue watching ‘America’s Got Talent’ after she leaves because her experiences on the program were “fabulous”. Previous judges also include Simon Cowell and Piers Morgan. – Femalefirst

One Direction To Have 20 Bodyguards Each On Tour