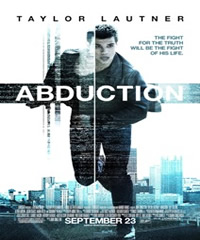 Starring Twilight series star Taylor Lautner, “Abduction” is an action thriller film directed by John Singleton. The story plot of movie is too captivating and heart arresting that there escapes no scene to be missed while watching the movie.

Film “Abduction” is about a teenager Nathan Harper played by Taylor Lautner who finds the world around him so strange when he sees his baby picture on a missing persons’ website. He comes to know that his parents are not the real ones and his whole childhood is built on lies. He battles to uncover the truth putting him in a mortal danger.

Nathan flees to save his life and tries to call the police but his call gets intercepted by CIA operative Frank Burton (Alfred Molina) who informs him that he is in danger and thus sends a team to protect him. But before the team arrives, Dr. Bennett tells Nathan to not to trust Frank Burton. She reveals the underlying truth to him and says to run.

Nathan heads to a safe house in Arlington, Virginia with his longtime crush Karen Murphy (Lily Collins) and there he battles to discover the mystery of his childhood…

Film “Abduction” is an engaging movie that entices viewers to watch it till end. Also, the action is impeccable and thriller is the very soul of it. People who love to watch action thriller movies; “Abduction” is a real treat for them.