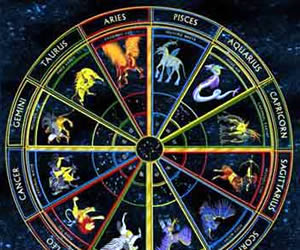 With not only a turnaround on the career front next week but more pressure as well, make the most of the relative calm this week and the chance you have to get work matters up to speed. As both the Sun and Mercury spend their last full week in your work sector, before Mercury leaves at the start and the Sun at the end of next week, they are coming together this week to bring things up to speed, literally. The week begins with the Sun and Mercury aligned in your work sector, with the Sun’s objectivity and Mercury’s intellectual savvy on the same page. This alignment ends when Mercury takes the lead, allowing you to work smarter and ensuring that your first reaction to anything is through your intellectual senses. A New Moon over the weekend gives you a chance to draw a line in the sand.

Make the most of the relative calm on the work front this week, aware that things will not only going to get a lot busier from next week but there’ll be a lot more urgency and tension. It’s Mercury’s return to your work sector next Monday and the Sun’s at the end of next week, that will see them both team up with Saturn for the last time for another 27 years, banding together to bring things up to speed and on the track you want them to continue on. In the meantime, Saturn is lying low and due to leave early next month, wrapping up a nearly 3 year visit, this is a week for taking care of any behind the scenes housekeeping and maintenance, ready to start bringing things home from next week. Work to streamline things on both the work and professional fronts, ready for some busy weeks ahead.

At the same time that things are easing back and settling down on the career front, with both professional and work/life balance pressure over the last few weeks easing right back, a new sense of confidence and determination is emerging on the work fronts. As you move into the new week Mars, warrior planet of the cosmos is still 4 weeks away from leaving your work sector and while he won’t align with the North Node until just days before he’s due to leave, each day that passes sees these forces draw progressively closer. It’s Mars’ fighting spirit and drives and the North Node’s sense of direction and of being supported that is giving you a lot more confidence, not only in the opportunities ahead but in your ability to stay the course and remain motivated. Remember to pace yourself.

While things have eased right back on the professional front, to a point where there may be a fear that you’ve lost your edge or that you’re running out of steam, this is both a temporary and a necessary lull. With a New Moon in your career sector at the end of the month and Mars, planet of passion, drive and ambition and the warrior planet of the cosmos returning to your work sector early next month, once the pace picks up again it will stay that way until early next year. This is giving you a chance to catch your breath, to work smarter and to catch up. With the Moon visiting neither of your professional houses this week, but Uranus keeping things kicking over on the career front, keep things in maintenance mode, taking their natural speed, course and direction.

As Pluto spends his last full week in retrograde motion in your work sector, before turning direct next Tuesday, there is a chance and a need to pull right back. Pluto will need to come to a complete standstill before his U turn next week and as the only planet active in either of your professional houses, this is going to slow things right down. While this may make it seem that things have become stuck, this is the slowdown that precedes next week’s turnaround, so needs to be seen as a good thing. While this brings a need to pull back and set your pace to the speed things are naturally moving, this gives you a chance to not only spend time back at the drawing board, but to focus more on the money, in the lead up to the weekend’s New Moon in your income sector. Keep it slow and steady.

As you move into the new week the Moon is just wrapping up his monthly visit to your career sector, making it important to move into the new working week with your finger on the pulse and your ear to the ground, holding onto the professional instincts, clues and hunches that the Moon leaves you with. This is the Moon’s first visit to your career sector since the South Node left last month, severing the hold that the past had on you, but also his last before Jupiter turns retrograde here next month, giving you a chance to retrace your steps. As the Moon moves on this leaves you with an intuitive sense of where things stand and more importantly how to pace yourself. It’s important to remember that you have both time and luck on your side, with nothing to be gained by pushing things.

The Moon’s return to your career sector on Monday comes just 3 days after Venus not only left but wrapped up all the planetary activity for the year. Just 10 days into a month that began with a Full Moon in your work sector and Venus in your career sector, things have eased back. While planetary forces on the work front will keep things on track, at a slow and steady pace, with no more planetary activity in your career sector the Moon’s position here from Monday to Wednesday gives you a chance to get your bearings and an intuitive sense of where to from here. As your professional instincts kick in they’ll align with the professional desires and expectations Venus left you with and together this gives you a clear sense of the professional goals and aspirations you need to commit to.

Any week that begins with the Sun and Mercury aligned in your career sector and ends with a New Moon here has to be a good one, especially as you have finally cleared the work/balance issues and challenges that only ran their course last week. The Sun and Mercury’s alignment on Monday and Tuesday sees the much faster Mercury catch up with and overtake the Sun, shifting this from the Sun’s observational focus to Mercury’s intellectually savvy one. By the time the Moon returns to your career sector on Friday, ahead of Sunday’s New Moon, you’ll have all the resources needed to seize the momentum and motivation this creates. A New Moon is always a good time for a fresh start and new beginnings, especially with Mercury leaving your career sector next Monday and the Sun later next week.

When Mercury returns to your career sector next Monday and the Sun next Sunday, one arriving at the start and the other at the end of next week, there’ll be no going back and with both teaming up with Saturn for the last time for another 27 years, this will be when things become a lot more urgent. With Saturn leaving your career sector on the 6th October, you’re just about to reach the point where things will turn into a sprint for the finish line. In the meantime, Saturn’s last full week on his own gives you a chance to work behind the scenes, focused on the big picture, so as the bell clangs for the start of the last lap, you know exactly how to play things. In the meantime, move into the new week with your finger on the pulse and your ear to the ground, especially on the work front.

Venus’ departure from your work sector last week brought all the planetary activity for the year to a close, yet as you move into the new week it’s too soon to package things up. It’s the Moon’s return to your work sector on Monday, just 3 days after Venus left and his position here until Wednesday, that gives you a chance to tie up loose ends, allowing you to pick up on clues and hunches that will put things on the track that you want them to continue on. While dominant career forces are still flexing their muscles and won’t come into their own until the first week in October, this gives you the confidence of knowing that anything you commit to on the work front has more than enough back up. So long as you can establish what you want on the work front, time will take care of the rest.

Mercury’s departure from your work sector on the 1st September and the North Node’s from your career sector on the 30th August gave you a chance to take your professional hat off and let things settle. That was a short 6 day reprieve and after Venus’ return to your work sector last week, her first full week here has you back in the game. With Mars returning to your career sector early next month this is the start of the real push to get your professional year up to speed. As the last planet to move through your work sector for the year Venus is able to have the last say, which means listening to your heart and what you do and don’t want. The Moon’s visit to your work sector from Wednesday to Friday and alignment with Venus on Thursday will provide additional clues, hunches and insights. – freepsychicnetwork