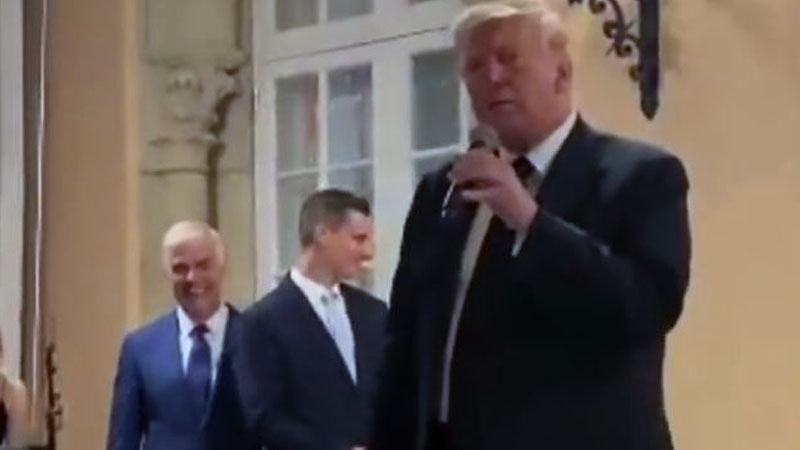 Former President Donald Trump allegedly crashed another wedding on Saturday, but instead of congratulating the couple, he reportedly ranted about Gen. Mark Milley and the 2020 election.

“I know Trump claims he doesn’t drink, but he sounded even more like a drunk uncle at a wedding tonight than usual,” attorney Ron Filipkowski wrote on Twitter, above video of Trump’s remarks.

Trump appears to be describing an alleged conversation he had with Milley, the chairman of the Joint Chiefs of Staff, regarding withdrawing US troops from Afghanistan in the video.

Referring to “$70 million planes,” Trump claims he told Milley, “You mean you think it’s cheaper to leave it there so they can have it than it is to fill it up with a half a tank of gas and fly it into Pakistan or fly it back to our country?”

“That’s when I realized he was a f*cking idiot,” Trump tells the audience, to laughter and applause.

In another video, Trump falsely states that the 2020 election is “all rigged.”

“The mail-in ballots, it was just horrible,” he tells the wedding party, before referring to the Capitol insurrection as a “protest.”

“The insurrection took place on Election Day, and the rest was a protest, and what they should be investigating is the election, not what took place that day, because the reason they had the protest was because of the election,” Trump says. “It’s very simple.”

It’s not the first time Trump has used someone else’s wedding to push his “big lie.”

“One wedding-related fear many people have is the prospect of a drunk guest grabbing the mic and, through slurred words, asking everyone to take their seats so they can just ‘say a couple of words,’ tripping over the bandleader’s foot in the process and yelling, ‘Hey, man, watch where you’re going!’ before launching into a rambling, incoherent speech about how they and the bride were supposed to be together before the groom came along and stole her,” Vanity Fair reported in March.

“Presumably fewer, if any, have ever worried about a former president of the United States wandering into their reception and giving a toast that involves ranting about how the election was stolen from him, in addition to some incomprehensible thoughts on the situation at the border and how he could have made a beautiful deal with the Iranian government the likes of which the world had never seen. Until now!”