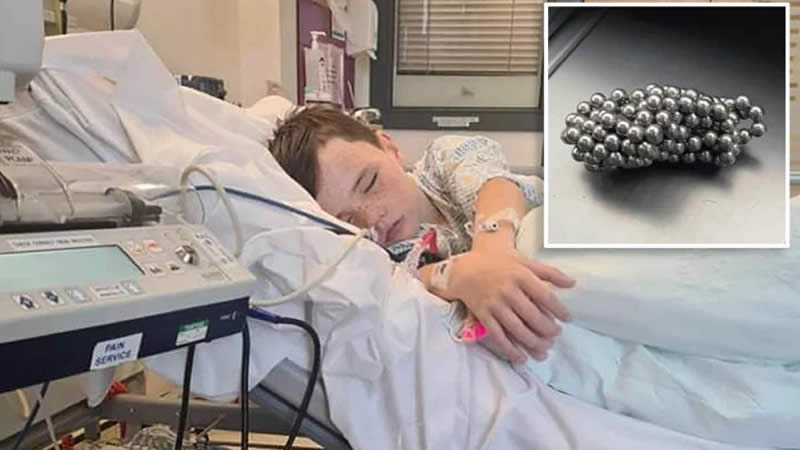 A 9-year-old boy was hospitalized after accidentally ingesting six magnets during a dangerous TikTok challenge. @BorestoneParents

After eating some beaded magnets after copying what he saw on the popular TikTok magnet challenge, a 9-year-old kid complained of stomach pains and had to undergo life-saving stomach surgery.

Jack Mason told his mother, Carolann McGeoch, that he ate several silver magnets while participating in the TikTok magnet challenge. The silver beaded magnets were placed in the mouths of children in viral videos because they resembled cool tongue piercings.

Jack’s mother took him to the hospital for emergency surgery after he began vomiting.

Magnets were lodged in the 9-year-old boy’s abdomen, preventing his bowel motions, as per reports. Parts of his small and large intestines were also damaged.

Doctors first informed McGeoch that her son would not survive because the magnets had caused such severe damage to his stomach. As she signed off on the operation, the mother said she was in tears, knowing that “anything could happen” to her son.

Miraculously, Jack’s surgery was successful, and his mother said that he was fortunate to be alive.

Jack will still have a lengthy recovery ahead of him because he is currently on a liquid diet and cannot walk without help.

His family is sharing their experience in order to warn others about the dangers of this dangerous viral game. The PTA at Jack’s school was issued a warning to ensure that many parents warn their children or look for magnets in their belongings that should be properly disposed of.

According to BBC, TikTok does not accept videos that “encourages, promotes, or glorifies behavior that might lead to injury.” The firm also stated that they have a team dedicated to remove such content. The TikTok magnet challenge, on the other hand, began in the summer and continues to spread on the platform even today.

In May, beaded magnets became lodged in a 13-year-old girl’s appendix and other internal organs, necessitating emergency surgery.

His parents had no idea how he found out about the TikTok challenge because they thought their son didn’t have the app. Her son’s school, on the other hand, looked for the students and discovered some magnetic beads in their things. Amy, his mother, shared on her social media to warn her followers about the hazards of swallowing beaded magnets.

Where Kids Get Beaded Magnets

Kids can spend countless hours playing Magneto Balls or Magneto Beads, a popular educational toy that allows kids to assemble together different figures. While this toy hones their creativity, the ball is simply the size of a matchstick head.

The Cincinnati Children’s Hospital released a PSA about the magnets in June. Doctors on TikTok, on the other hand, have created films warning people not to take the risky challenge since the consequence would not be enjoyable.

Trump Issued Bizarre, 3 Sentence Statement About Gas Prices: “I Told You So!”