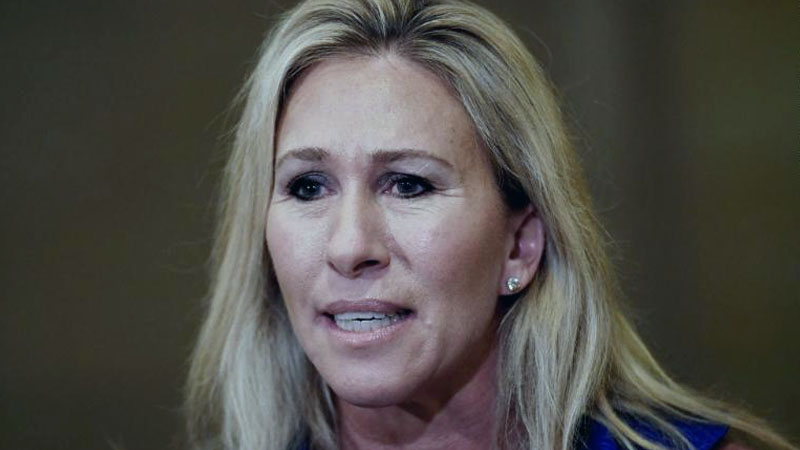 As the House was voting on the criminal contempt resolution against Steve Bannon, Rep. Marjorie Taylor Greene confronted Reps. Jamie Raskin and Liz Cheney on the House floor.

The conversation with Greene deteriorated into “Jewish space lasers,” with the Georgia Republican accusing Raskin, a Maryland Democrat, of neglecting to investigate the violence at Black Lives Matter protests.

“This is a joke,” Greene said in a raised voice to Raskin and Cheney, a Wyoming Republican, engaging in an altercation with the pair in the middle of the House floor.

Then Greene walked closer and said directly to Raskin, “Why don’t you care about the American people?”

Greene is seen approaching Raskin and Cheney on the House floor in the video. Greene waves her hands in the air, and Cheney points her finger in the air back at her before turning her back on her. For the most part, the three were separated by a row of seats.

As per a source familiar with the interaction, Cheney responded to Greene by calling her a “joke” and referring to a previous Greene comment about Jewish space lasers.

“I never said that!” Greene yelled back at Cheney. “You’re done. You’re a joke, Liz. Your party rejected you.” As Greene walked away from the pair, she suggested: “Why don’t you go investigate something that matters to the American people?”

Greene’s remarks about Cheney are just the latest example of how tensions between members of the Freedom Caucus and Cheney remain high. Cheney was voted out of her GOP leadership position and is seen by the right-wing of her caucus as betraying them by joining the Democratic-led committee investigating the January 6 incident.

After the altercation, Raskin told reporters, “She started screaming at Liz.”

Raskin then provided additional information, indicating that Greene had asked him to investigate the violence surrounding Black Lives Matter protests.

“What she said to me was, ‘When are you going to do your investigation of the violence surrounding Black Lives Matter?’ And I said, ‘Like with Kyle Rittenhouse who went and killed two Black Lives, Matter protesters? I’m sure there will be an opportunity for us to get to that,'” Raskin said. “And then, you know, it degenerated it from there as you can imagine.”

Describing the heated exchange between Cheney and Greene specifically, Raskin said Greene “seemed to have some kind of ancient beef with the former chair of the House Republican Conference Liz Cheney over the Jewish space lasers thing or something like that. And she denied that she’d ever said that and then blamed it on the mainstream media.”

Donald Trump Has the Type of Attorneys You Get When You Offer to Pay Your Lawyers in Livestock, If At All

Not seeking to pressure countries to choose between working with US or China: Blinken