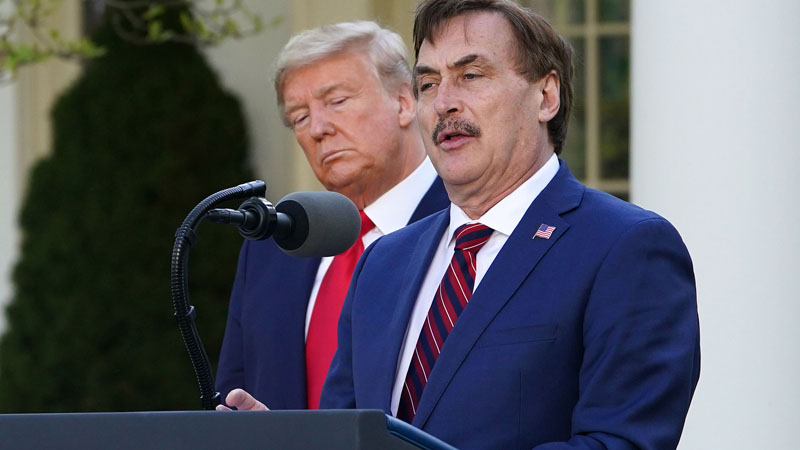 Despite a flood of contrary evidence, the chief executive of MyPillow and ardent supporter of Donald Trump, Mike Lindell, claims to have invested $35–40 million in a broad campaign to promote claims that the 2020 election was tainted with fraud. This includes a wave of lawsuits to overturn voting machines that he blames for Trump’s loss, a new movie about voting fraud, and a sizable legal stable.

As per The Guardian, Lindell is hosting a two-day “Moment of Truth” summit on August 20 and 21 in Missouri. He expects it to draw 200 federal and state officials and staff, as well as hundreds of representatives from groups nationwide who have looked into alleged election fraud this year and in 2020. This is part of his frantic effort to get rid of the electronic voting equipment that he has frequently claimed is defective.

Former Arizona sheriff Richard Mack, who is in charge of the right-wing Constitutional Sheriffs and Peace Officers Association, is anticipated to be one of the major voices (CSPOA). The organization held a meeting in July in Las Vegas, which Lindell attended and promoted using a TV station he owns. The group has also taken the unusual step of making election fraud monitoring its top focus, which Mack has labeled a “holy cause.”

The next Lindell summit will highlight his and his supporters’ expanding responsibilities in a vast network fighting on numerous fronts to spread Trump’s “big lie” about the 2020 election and rally activists to increase their inspection of the upcoming midterm elections as poll workers and poll monitors. Election watchdogs warn that these measures may limit voting rights and frighten voters.

“Mega-donor spending, long associated with Super Pacs and non-profits, is now also aimed at shaping even how our elections are administered,” said Sheila Krumholz, who leads OpenSecrets, which tracks campaign money. “Election administration is critical infrastructure in a democracy and should not be determined by partisan power-brokers.”

The pro-Trump network appears to be expanding in spite of convincing evidence being presented to the House panel looking into the attack on the Capitol on January 6, including former attorney general Bill Barr’s comments that he told Trump there was no evidence of significant fraud in 2020 and a number of studies showing that voter fraud is historically low.

“It is troubling to see conspiracy theorists investing money in a network designed to spread their lies about the 2020 election,” said Sean Morales-Doyle, the acting director of the voting rights and elections program at the Brennan Center for Justice. “They are using those conspiracies in an attempt to cause real harm to voters, and to our democracy. In the search for non-existent fraud, they are turning American citizens against their neighbors, who seek only to exercise their fundamental right to vote.”

Morales-Doyle added: “Now, it seems that election deniers have begun recruiting law enforcement to their cause. At a time when both voters and election workers have cause to fear intimidation and harassment, it is shameful that law enforcement officers would compound that fear rather than offering them protection.”

Some sheriffs too are troubled by law enforcement officials getting involved in elections.

“There’s no place for politics in policing,” Paul Penzone, the sheriff of Arizona’s Maricopa county, told the Guardian. “We are seeing a radical movement, including some local law enforcement, of people who are committed to destroying trust in our system for their own selfish gain.

“We must fight against it, or our nation will no longer be the democratic standard.”

Critics notwithstanding, “big lie” advocacy looks to be broadening.

Woman Diagnosed With “Exceedingly Rare” Cancer after Years of Being Told By Doctors That She Had Anxiety: “I Went To Eight Different Doctors, Did All Kinds of Tests And Everybody Just Kept Telling Me I Had Anxiety”