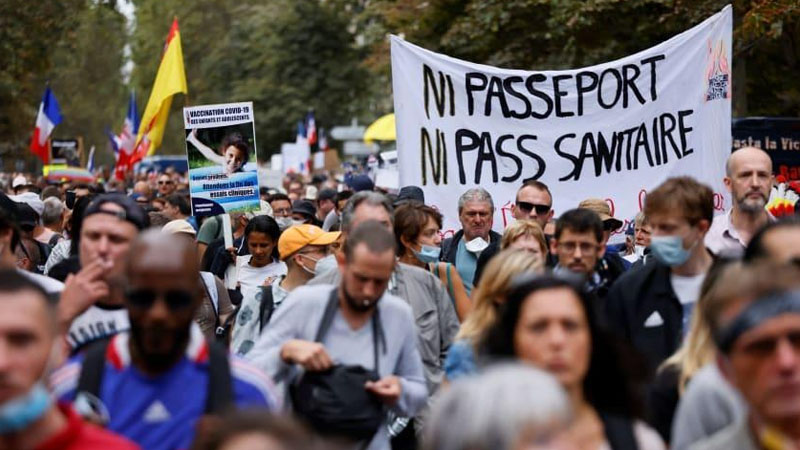 The left used to warn about unintended consequences in foreign policy. Maybe it’s time to remember those warnings.

Case rates for the Omicron variant of COVID-19 are growing exponentially across the United States, and while hospitalizations and deaths haven’t followed a similar pattern, the sheer size of the caseload means those numbers are increasing as well. The difference between the two rates is due in part to Omicron’s mild effects, but widespread immunity from a combination of initial vaccination, boosters, and recovery from previous COVID cases is also a factor.

Many people are calling for broad vaccine mandates, perhaps as a condition of commercial air travel (as my colleague Ryan Cooper has argued), or perhaps as a duplicate of France, where a law passed Sunday will restrict unvaccinated people — including those who have tested negative or have proof of recent recovery — from restaurants, sports venues, theaters, all domestic flights, and some trains.

I suspect that such a mandate would be effective in the United States. As Freddie DeBoer has expected, “there would be an absolute deluge of lawsuits the minute any universal mandate was formalized as policy, and it would be years before anyone would be forcibly inoculated.” Furthermore, as enthusiastic as I am about vaccines, I can’t justify injecting things into other people’s bodies at the point of a sword.

But the pro-mandate crowd appears unconcerned by that prospector, to put it more charitably, believes that the government’s interest in public health here outweighs the individual’s interest is liberty and that even a slow, lawsuit-ridden mandate is preferable to none at all. But, if neither pragmatics nor principle is enough to prevent you from seeking a mandate, consider this: blowback.

Chalmers Johnson’s Blowback: The Costs and Consequences of the American Empire was likely the first contemporary political book I read. The blowback was published in early 2000, 18 months before the 9/11 attacks and subsequent foreign policy disasters that would introduce the term. I started working as a political science major in 2007 or 2008, owing to a growing interest in foreign policy (and that my then-not-boyfriend, now-husband could be seen holding it in a photo on Facebook).

Blowback felt a little scandalous on that initial read because my upbringing was conservative. Anything which might be construed as “blaming America first” at that time remained vehemently verboten on the right, a glaring violation of what I’d now call “patriotic correctness.” There was nothing among mainstream Republicans in 2007 like former President Donald Trump’s observation a decade later that the U.S. government, just like its Russian counterpart, kills people. We were the good guys, full stop, and as for the motives of those who attacked us — well, “they hate our freedoms.”

Johnson’s thesis, as he writes in his first chapter, is that there’s a bit more to it, actually: that Americans “have created an empire;” that there are “consequences of our imperial stance for the rest of the world and for ourselves;” that “there is a kind of balance sheet” of U.S. actions abroad “that builds up over time;” and that — because not all those actions are positive for the people who experience them — they’re “likely to build up reservoirs of resentment against all Americans … that can have lethal results.”

“Blowback” is the CIA term for the unintended, negative consequences of US foreign policy, especially those kept hidden from the American people (such as US-orchestrated coups) or which we haven’t seriously considered as a plausible source of foreign anger (like the existence of roughly 800 U.S. military bases in dozens of nations worldwide). The term is not a moral judgment, but rather an observation of the world — and human nature — as it is, a recognition that people in other countries love their families, friends, homes, cities, and holy places just as much as we do, and will react with anger if they are violated.

Recognizing the reality of blowback does not indicate that the specific retaliations chosen by those individuals are just or legitimate. Commonly, they are not. They are, however, understandable and, to some extent, predictable. If US drones aimed at a terrorist instead kill an innocent farmer’s wife and maim his children, we shouldn’t be surprised if he becomes hostile to America, possibly even becoming a terrorist himself.

Libertarians and the left understood this long before most conservatives. That was the line of division when blowback was controversial in the aughts when I first encountered the concept. Now, as broad COVID vaccine mandates are being debated and largely supported on the left, blowback appears to be a timely concept once again.

Do we think there wouldn’t be pushback if our government-mandated vaccines for so much of everyday life — banning unvaccinated adults from restaurants, planes, and so on? Do we believe there will be no unintended consequences if a large portion of the country is denied access to public recreation and transportation? Of course, some small businesses would quietly refuse to comply, continuing to serve unvaccinated customers. However, with major businesses, especially those that are heavily regulated, such as airlines, enforcement could be consistent, and higher vaccination rates would not be the only effect.

Parts of Western Europe offer a partial preview of the enormous resentment and alienation this would produce among those determined not to be vaccinated. “People without a [vaccination] certificate like me, we’re not a part of society anymore,” a Swiss vaccine mandate critic named Nicolas Rimoldi told CNN for a report published Sunday. “We’re excluded. We’re like less valuable humans.”

Rimoldi and others like him are “falling out of society,” as CNN’s headline put it, and if the effects of a mandate differ from those in Europe, I only see them differing for the worse: We have a more robust culture of individualism and defiance to centralized power. Ours is a larger country with a greater need for domestic air travel. As progressives frequently point out, we have a lot more guns. Even if only 10% of U.S. adults consistently defied the mandate, that’s still about 26 million people or three times the population of Switzerland.

Do we want to tell 26 million people they are no longer a part of our society? Isn’t the danger of going that route self-evident?

Sure, we might only get retaliation from a small percentage of that small fraction, and I’ve been skeptical of the claim that we’re on the verge of a new civil war. But what if the federal government forced millions of people to abandon their normal lives? If it caused all of those people to “fall out of society”? Given them a reason to believe they would never be able to live as they did in 2019 under our current governance system? Never fly to see their parents or grandchildren again, never eat at a chain restaurant, never go to a ball game in person, never see a movie in theaters?

Then my expectations for civil strife may begin to shift. This is the kind of thing that could lead to a significant number of people transitioning from “playact[ing] extremism” online to becoming real-life extremists.

Advocates of mandates, understandably, couch their arguments in terms of safety — but so do many advocates of the American empire. Good intentions don’t change the realities of foreign policy blowback, and I don’t think they’d change the realities of a domestic vaccine mandate either. In both cases, we must consider whether a naive plan to save lives may instead lead to more tragedy.