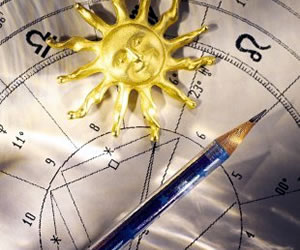 Your business Horoscope looks at your business potential for the week ahead. Wondering whether a new career opportunity is going to come your way? How are your job prospects shaping up? Select your Sun Sign from the list below to view your Horoscope.

There is a fairly dramatic shift in focus this week, making it a lot more about the money. It was over the weekend that Pluto turned retrograde in your business sector and as the only planet in either of your professional houses this has brought to an end any forward momentum, giving you a chance to let what is already on the table play out and also a chance to retrace your steps. This sees a very active push to get your professional year off the ground take a back seat, giving professional forces a chance to take a free ride for a while. What makes it more about the money is Venus’ return to your income sector on Monday, just 2 days after Pluto turned retrograde in your business sector. This opens the door to new opportunities on the income front as second chances open up on the business front.

This is a week where you’re able to let things slide or find their own level, for while there is no planetary activity in either of your professional houses and this is now the norm at this time of year, there is no lunar activity either, giving you a chance to let things settle. This is something that you’re still adjusting to, for with Saturn in your work sector for the last 3 years and until last February your business sector continuously active since 1995, this is a new experience for you. What you do have a chance to focus on this week is the money, with the Moon’s position in your income sector in the early days of the week his last visit before major developments next month. With your professional momentum banked it’s time to start focusing more on what’s in it for you.

Mercury’s departure from your business sector on Sunday, just 24 hours before the new week began, has brought you to a new chapter and the line in the sand from one to the other is likely to be quite abrupt, more so than you would expect. Mercury’s departure from your business sector brought to an end a very active push that began in early February and it’s only natural that things would ease back, for you’ve reached a point where now that you’re at cruising speed you can ease off on the accelerator and even go into cruise mode or engage auto pilot. This gives you a chance to let things already in motion play out and with your cake in the oven to walk away.

There is a definite shift in focus on the professional front this week as on Monday, just as Mercury is spending his first full day in your business sector, Venus leaves. This sees Venus’ heart lead rein come to an end, but not before leaving you with the professional desires and expectations that leave you in no doubt what you want and Mercury’s intellectual savvy take its place. With the Sun and Mars leaving your business sector on Saturday and Mercury early next month, Venus’ departure on Monday marks the point where it’s time to start tying up loose ends, with Mercury returning to help you to work smarter, to craft your game plan and to make the right choices and decisions. Until the Sun and Mars leave keep your eyes open and your professional passions and fighting spirit engaged.

You have reached a game changing week. Pluto, since early February the only planet in either of your professional houses, turned retrograde in your work sector over the weekend, bringing an already flagging work focus to a halt and to a point where you’ve not only lost forward momentum but you’re starting to back track. This should have brought things to a halt this week and as Pluto is still stationary, a chance to pull right back. However, while that’s still the case of the work front, on the professional front as a whole the very opposite is true. For it’s on Monday, just 2 days after Pluto turned retrograde in your work sector, that Venus will return to your business sector and with the Sun and Mars returning over the weekend, they’ll quickly pick up the slack.

Move into the new week with your finger on the pulse and your ear to the ground, for with the Moon in your business sector your professional instincts will not only be sharp an alignment with lucky Jupiter on Monday creates the potential for some lucky hunches. This is the case during each of the Moon’s monthly visits since Jupiter was left on his own last August, but there is something different about this visit. As the last visit before Venus returns to trigger all the untapped potential building behind the scenes, the Moon brings a message that it’s time to get ready, that whatever you’ve been waiting for or building towards is now just around the corner.

Mercury’s departure from your work sector on Sunday brought to an end a very active and busy few months, but also a phase that was all about getting things out in the open, up to speed and on the right track, to a point where on the work front you can now afford to let things settle. This buys you time before the next surge begins in early June, this time on the business front. However, it’s the Moon’s return to your business sector on Tuesday, just 2 days after Mercury wrapped things up on the work front, that as well as sharpening your professional instincts gives you a chance to start looking at where to from here. With the focus on work matters for so long it could be that you’ve developed tunnel vision, so focused on your job and the work you’re doing to focus on the big picture.

While things will be just as busy this week and possibly even busier, you also have the resources to work smarter and a sense of urgency that is telling you it’s time to start tying up loose ends. On Monday, as Mercury is spending his first full day in your work sector Venus leaves, leaving you with a clear sense of what you do and don’t want on the work front and the resources to walk the talk. Until the Sun and Mars leave your work sector on Saturday continue to get everything out in the open, getting a realistic sense of where things stand and what you’re working with, giving you an authentic starting point and something to fight for. The Moon’s return to your business sector on Friday will ensure your professional instincts are sharp as you begin tying up loose ends.

With no planetary activity in either of your professional houses since last October you’ve got used to doing it on your own and when the Moon left your work sector on Sunday, just 24 hours before the new week began, this should have been all the support and insight you’ll get until he returns next month. Instead having the Moon move through so recently means you’ll be on your toes as Venus returns to your work sector on Monday, bringing the first planetary support in 6 months and in the process opening the door to new work opportunities. This comes just 2 days after Pluto’s retrograde turn in your income sector over the weekend opened the door to second chances on the income front. On Saturday the Sun and Mars will return to your work sector, by which point it will be ‘game on’.

Moving into the new week with the Moon in your work sector will always be an advantage, giving you an intuitive edge and thanks to an alignment with Jupiter on Monday, access to lucky hunches as well. This makes it important to move into the week with your finger on the pulse and your ear to the ground. The Moon visits your work sector once a month and since Jupiter has been on his own since last August, this has been your only means to check that you’re on track and to touch back with the powerful forces working behind the scenes. Yet there is likely to be something different about the Moon’s visit this month, with a new sense of urgency and anticipation setting in, for this is his last visit before everything starts coming together, which it will from the 10th May.

Monday marks the start of what might be a bumpy few weeks, for it’s Venus’ return to your home and family sector and then the Sun and Mars’ later in the week that puts them in opposition with Saturn, over in your business sector, creating the potential for work/life balance issues, tensions and/or challenges. The Sun will always visit your home and family sector at this time every year, beginning what is always your annual update for home and family matters. However, for the first time in nearly 30 years Saturn is on the other side of the sky in your business sector and over the coming weeks this sets the scene for a series of Saturn oppositions. The Moon’s visit to your work sector mid week will give you an intuitive edge, making it easier to pick your battles wisely.

In a week where the focus is more on money than your professional game, trusting that you already have your professional objectives and priorities banked, you’ll have a chance towards the end of the week to nail your objectives on both fronts. The Moon’s return to your work sector on Friday, just as the Sun and Mars are spending their last full day in your income sector will give you an intuitive edge at what is a defining point on the income front. With the Moon not leaving your work sector until Sunday this will ensure that you’re plugged in when it comes to work matters, able to keep your finger on the pulse and your ear to the ground as you begin to finalize your income objectives. A smart head for money and an intuitive take on work matters gives you an edge on both fronts. – Astrolis