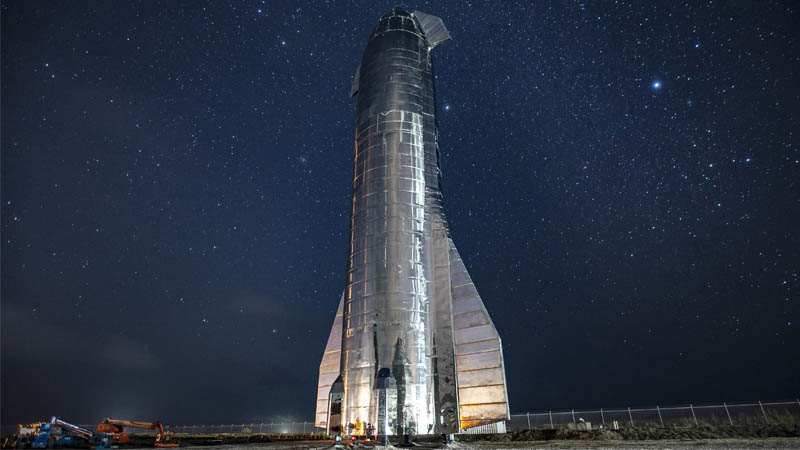 The vehicle is designed to go to the moon and Mars, but first, its latest prototype needs to get some air.

The development process of Starship, the next-generation space vehicle Elon Musk and SpaceX hope will one day carry humans to Mars, has had its speed bumps, but now things seem to be progressing toward another short test flight, or “hop,” of a new prototype.

Since a small single-engine prototype dubbed “Starhopper” levitated itself above the Texas Gulf Coast for a short flight last year, a few larger Starship prototypes have succumbed to mishaps during pressure tests. But the latest iteration, labeled SN4, has passed those same tests and has also successfully been fired up while being held in place.

Such static fire tests are usually one of the last steps before a rocket finally leaves the ground.

Musk has said the SN series of prototypes will be capable of flying to an elevation of at least 12.4 miles (20 kilometers), but the SN4 will first make a roughly 500 foot (150 meter) hop like Starhopper before it.

It’s not yet clear when the larger Starship prototype could finally get a little air, but witnesses near the SpaceX test facility in Boca Chica, Texas, spotted SN4’s Raptor engine being removed after the test fire and replaced with a different one.

The FAA has issued a flight advisory for the airspace around Boca Chica for Tuesday through Friday of this week, along with road and beach closures issued by Cameron County. It’s expected that SpaceX will use this week to conduct another hold-down firing test of the new Raptor engine, hopefully paving the way for a hop sometime soon.

How to Take Care of Your Eyes