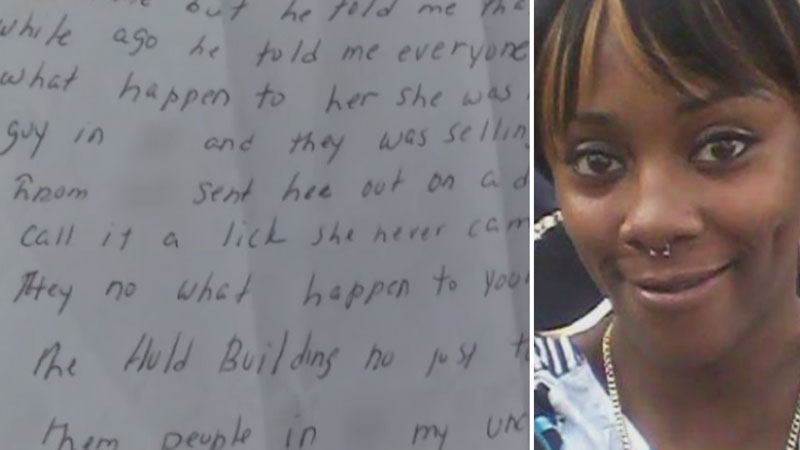 SHEEPSHEAD BAY, Brooklyn (PIX11) — In the fall of 2021, Victoria Boomer-Harris received a mysterious letter addressed to her Sheepshead Bay apartment on Batchelder Street.

The letter writer claimed to have knowledge about the disappearance of Boomer-Harris’ daughter, Aliyah, in August of 2015, using a Bronx return address.

“Everybody in that building no [know] what happen to her,” the letter writer claimed, telling Boomer-Harris that her late uncle once lived on the first floor.

Aliyah Boomer was 27 years old when she went missing on August 15, 2015. She was going to a local church to attend her mother’s birthday.

“Sunday, I called her, and I didn’t get an answer,” Boomer-Harris, a senior church pastor, recalled.
“So, we started the service, and Li Li still didn’t show up,” the mother added, using Aliyah Boomer’s nickname.

Aliyah Boomer, the youngest of four sisters, had gone to a BBQ in Prospect Park with her girlfriend, the family learned as they pieced together the events of Saturday and Sunday that weekend. After an argument, the two women returned to the girlfriend’s house at 444 Columbia Street in Red Hook Houses. That was the last time Aliyah Boomer was seen.

“She was a very outgoing, happy person,” said Zulema Hunt, Aliyah’s sister. “There was no reason to go missing.”

Aliyah Boomer reportedly tried to contact her sister Vanessa around 3 a.m. on Sunday morning, but she was asleep and didn’t wake up until 6 a.m.

Aliyah Boomer, according to Hunt, was studying to become a certified nursing assistant and was still living with her mother at Nostrand Houses in Sheepshead Bay.

Last fall, the letter was received at that address.

Her uncle had been talking about his acquaintance in Apartment 2-C, “your family member,” before he died, according to the letter writer. According to the writer, the missing woman was seen with a man and woman who lived on the third floor.

“The people….sent her out on a drug run, I think they call it a ‘lick,’” the letter writer said. “She never came back. My uncle said they no [know] what happen to your family member,” the writer added.

The writer stated that everyone in the building knew what happened to the missing woman.

Aliyah Boomer’s mother talked with us about the letter’s content.

“I was asking my nephew and girlfriend ‘What’s a lick?’” the mother shared with PIX11 News.  “She said, ‘When they send people out to sell drugs and things don’t go right, and they don’t show up.’”

When PIX11 News asked the mother if she thought this might have happened to her daughter, she responded “It might have.”

However, retired NYPD Sergeant Joseph Giacalone of John Jay College, who once led a Cold Case Squad, believes the letter writer may be trying to confuse the family and investigators. The reason behind this is unknown.

Aliyah Boomer’s mother has lost several members of her family in recent years, including her mother, grandmother, and sibling.

When we asked the mother how she copes with not knowing what happened to her daughter, she burst into tears and expressed her sorrow at “losing so many people in my family.”

Hunt, who just opened a new store on Nostrand Avenue called Fire Drill, has offered a $10,000 reward for information leading to her sister’s location.

She’s upset the case didn’t receive much attention, “because we’re African American and she was 27 when she went missing, and they consider her an adult,” the sister said.

“My mother suffers from stress, depression, she’s a very Godly woman,” Hunt said, also telling us her mom is waging a battle against cancer.

Hunt has one goal.

“Just finding out what happened, and who was involved,” Aliyah Boomer’s sister concluded.

The dog went missing in 2010. After 12 years, she was found just miles from her family and returned

‘Inspirational’ Meghan Markle is as popular as Princess Diana

Man shot and killed his pregnant, disabled wife after she caught him having an affair with woman overseas