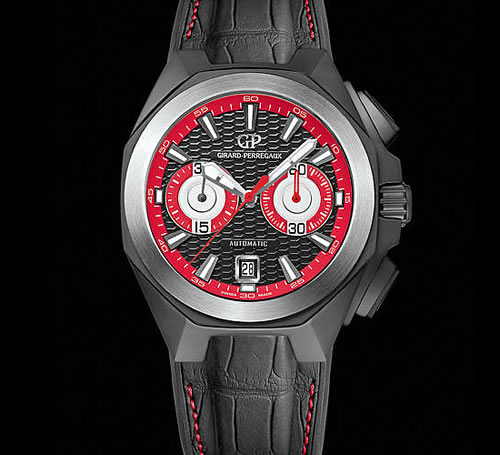 Girard-Perregaux has kept the world of haute horology busy this year, with the earlier major timepiece, the Constant Escapement watch Now to keep the fans and collectors interested like before, they have introduced the Chrono Hawk Only watch, which makes a distinct and bold statement with it’s style factor.

Marking out the high quality craftsmanship from one of the world’s premier watchmakers, this timepiece is elegant as well as sporty to look at. A round ceramic 44mm casing with contrasting use of gray and red shades, the strap of this special time piece is crafted out of rubber coated with black alligator leather, which has been given the single red stitching for the contrast. In other words, this timepiece can be described as a collector’s piece, but only those who are wealthy and sporty at the same time. 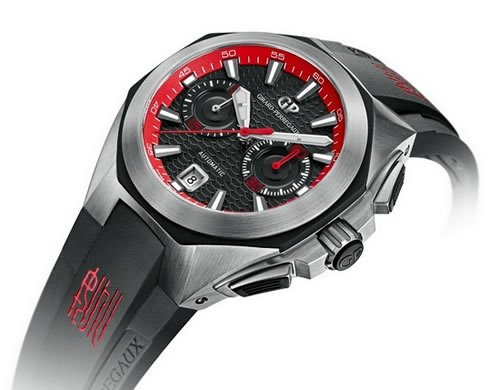 Girard-Perregaux Chrono Hawk maintains the bold status, which we saw in the other creations. Seems like the brand’s DNA composition! However, here they have put on a rugged looking palladium and ceramic casing, where dark black and silvery white interplay with each other. The contrast most apparent is on the dial itself where the outer ring is in bright red, and so is the seconds hands ticking about it’s business with the red sub-dials beneath. The hour and minute hands appear to be brushed finished steel, with luminescent decoration on it .

The functionality of the Hawk Only watch has hour, minute, small second, chronograph, and date. The movement inside is a GP03300, which a self winding automatic design which is expected to have a minimum of 46 hours power reserve. The beat rate of the movement is 28,800 vibrations an hour. It offers a rugged 100 meters of water resistance, which could be due to the tough anti-reflective sapphire covering, which also exposes a part of the skeleton on the case back. On the whole, this timepiece would definitely suit a variety of modern wearers, so might be a good deal to pick at the nearest boutique of the brand. – Bornrich

Mariah Carey does the splits! Singer Bursts out of her Dress on Stage