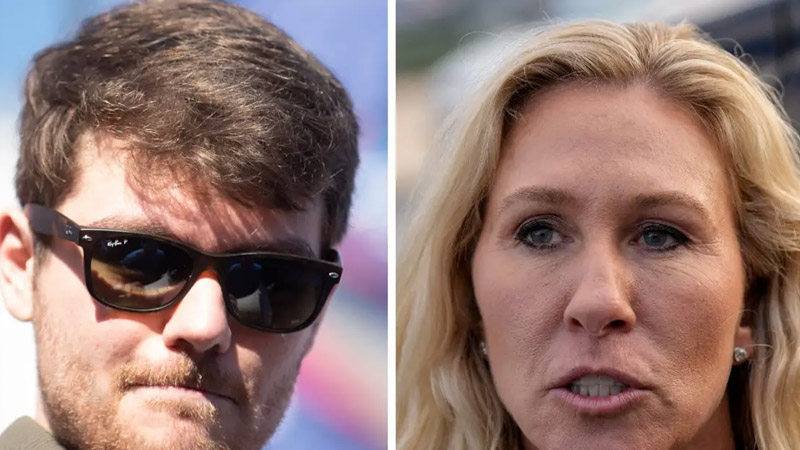 Nick Fuentes, a white supremacist organizer who claims to be working for Ye, formerly known as Kanye West’s, 2024 presidential campaign, has turned on Georgia Rep. Marjorie Taylor Greene after she criticized him earlier this week.

“She’ll go and say something edgy to get attention, and when the pressure comes, she buckles,” he said. Fuentes told viewers of the online show that he is now “over” Greene.

Greene spoke at a conference organized by Fuentes earlier this year, according to The Hill.

However, she distanced herself from the white nationalist last week when he attended a contentious dinner with former President Donald Trump, Ye, and far-right activist Milo Yiannopoulos, according to The Hill.

“Of course, I denounce Nick Fuentes and his racist, anti-semitic ideology,” she tweeted on Wednesday. Speaking on her own show, Greene described Fuentes as “racist” and “immature” and asked why Ye would “align himself with that.”

Fuentes alleged on “Politically Provoked” that Greene wanted to visit the 2024 presidential campaign office in California just a week ago. According to The Daily Beast, Fuentes stated last week that he is working with Ye on his campaign. According to NBC News, Yiannopoulos is now serving as Ye’s political consultant.

“Here’s the funny thing: A week ago, she was texting Milo and saying that she wanted to come to the office,” he said. Fuentes went on to claim that Greene wanted to visit “when it was cool” but “flipped back” afterward.

“When it was the hottest thing in the world, she would do anything to be a part of it,” he said. “But the second it got a little bit uncomfortable when the swastikas came out, not even. Before the swastikas came out. Then she goes, ‘Oh, actually, I denounce,’ and it’s just so predictable.”

Fuentes is referring to Ye’s Twitter ban after he posted a Nazi swastika within a Jewish Star of David only hours after praising Hitler and the Nazis on Alex Jones’ “Infowars” show.

Here’s How to Maximize Space as You’re Packing

Kate Middleton and Prince William’s friends are in full on spiral right now: “there’s going to be a lot of nerves in the palaces”

COVID cases appear to be on the rise in Colorado. Is another surgeon the way?