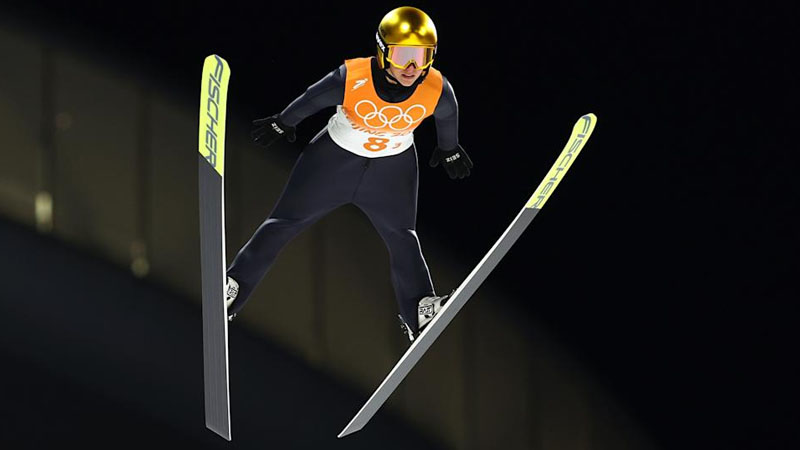 Katharina Althaus was one of the competitors disqualified EPA

When you’re flying more than 100 yards off a 377-foot-tall ski jump at 60 miles per hour, you’d think your outfit would be near the bottom of the list. But, as several Olympians found to their chagrin on Tuesday, what you wear on the jump is just as important as where you land.

Five ski jumpers were disqualified from Tuesday’s mixed team jump event. All of the women from Austria, Japan, Norway, and Germany were found to be wearing loose-fitting clothing that could have provided them with extra loft while in the air.

Suits are obviously important for ski jumpers; you wouldn’t want to go flying through the air in a wedding dress or suit of armor, for example. A suit with extra material in just the right places, on the other hand, could catch the wind and keep the jumper aloft like a flying squirrel. The issue with Tuesday’s DQs is that the jumpers’ suits had apparently been cleared in previous jump outings.

“The [International Ski Federation] destroyed everything with this operation. I think they have destroyed women’s ski jumping,” said Katharina Althaus, a three-time Olympian, and 2018 silver medalist, after the DQs came down. “I have been checked so many times in 11 years of ski jumping, and I have never been disqualified once. I know my suit was compliant.”

Althaus later shared her frustration on Instagram. “160 World Cup starts, 5x World Championships, 3x Olympic Games and I got DSQ for the first time,” she wrote. “My heart is broken.”

“We stick together no matter what!” fellow German jumper Karl Geiger wrote on social media. “Nevertheless, I have to ask myself whether the regulations for the women were changed overnight, with so many disqualifications?!? It was neither the right time nor the right place to disqualify so many athletes from different nations.”

“It is just strange that they have been using the same suits yesterday and there was no problem,” German coach Stefan Horngacher said. “It is annoying that this happens at the Winter Olympic Games. This should all be cleared before.”

“I am sorry on behalf of ski jumping,” Norwegian ski jumping chief of sports Clas Brede Braathen said. “This is something we should have cleaned up in before the Olympics. The sport of ski jumping has experienced one of its darker days today.”

He noted that the DQs threatens to undo all of ski jumping’s recent progress, as the game has a less-than-stellar track record of accommodating women.

“I’m lost for words, really,” Braathen adds. “This is very painful for the athletes. I’m in pain on behalf of our sport. We were going to introduce a new event. The girls were to get a new event in the Olympics, and that’s how it ends. And why are only girls being disqualified?”

Women have fought for decades to have ski jumping included in the Olympics. European sports officials resisted efforts to allow women to jump, using arguments that descended from the ramp of logic into the pitch darkness of ignorance and sexism. As an example:

“Don’t forget it’s like jumping down … on the ground about a thousand times a year,” said Gian Franco Kaspar, former head of the International Ski Federation, “which seems not to be appropriate for ladies from a medical point of view.”

Slovenia won the competition with 1,001.5 points, well ahead of Russia with 890.3 and Canada with 844.6. The winners felt sympathy, but only a little sympathy, for the DQ’d jumpers.

“Equipment is very important in sport and disqualifications happen,” Canada’s Abigail Strate said. “It’s a very common thing to happen in ski jumping and the fact that it happened at the Olympics just goes to show that they were taking the rules pretty strictly and seriously because it is the absolute highest level of the sport.”

Asked whether her medal was bittersweet because of the DQs, Strate didn’t hesitate. “I don’t think this is a bittersweet medal at all,” she said. “I think it’s as sweet as a medal can come.”

“Even if you count all the distances and judge points from the unlucky ones on today’s competition,” Slovenia’s Peter Prevc said, “we should still be first, so it’s still great.”

Trevor Lawrence Is Having A Tough Day At Jaguars Practice