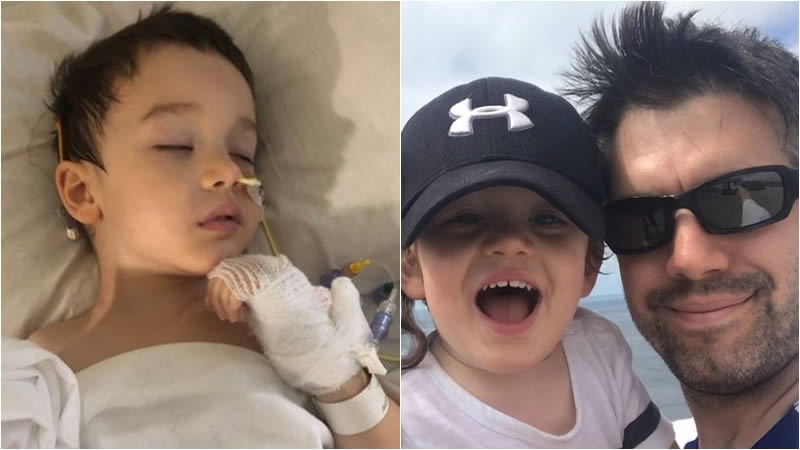 After throwing up at nearly the same time every day, a 5-year-old child was diagnosed with deadly cancer.

Shortly before Nate Gidman’s fourth birthday, his parents noticed he was getting nauseated every morning.

On Wednesday, the boy’s father, Phil Gidman, told The Mirror newspaper, “You could almost set your watch by it.”

“Every morning at 6 a.m., he’d get up, puke, and then go about his business.” This continued on for a few weeks until one day the boy’s eye began to turn inward. At this point, his parents sensed something was seriously wrong.

Nate was suffering from a serious viral illness at the time. However, the medication prescribed did not relieve his symptoms, and his parents requested that doctors reassess him.

“He got a CT scan, and a doctor and three nurses walked into the room where I was with Nate a few hours later.” “One of them kidnapped him,” Gidman stated. “That’s when they told us they’d discovered a lump in his head.” “You’re just pitying yourself.” ‘Of all the locations you may get cancer, why in your brain?’ you wonder. “All you can think about is not wanting your child to die,” he explained.

Nate’s family, who live in Lincoln, England’s East Midlands, rushed him to a specialist hospital in Nottingham, where surgeons removed 40-50 percent of the tumor.

Around 95 percent of the tumor on the boy’s brain was eventually removed. Radiotherapy, chemotherapy, and stem cell therapy were all necessary for him. Following the surgery, he apparently had problems, including a buildup of brain fluid that required another procedure to remove.

“We later spoke with Nate’s nurse, who has been absolutely fantastic,” the father stated, “and she informed us she thought he was a couple of hours from death at that moment.”

As per Washingtonnewsday, Nate was released from the hospital in late 2020 and spent much of 2021 getting treatment, including chemotherapy.

A day after speaking with the Mirror, his family learned that his disease had spread.

“His cancer has swiftly advanced in his brain and spine,” the boy’s father wrote in a message on Twitter. While we wait, he’ll stay young. This is a condensed version of the information.