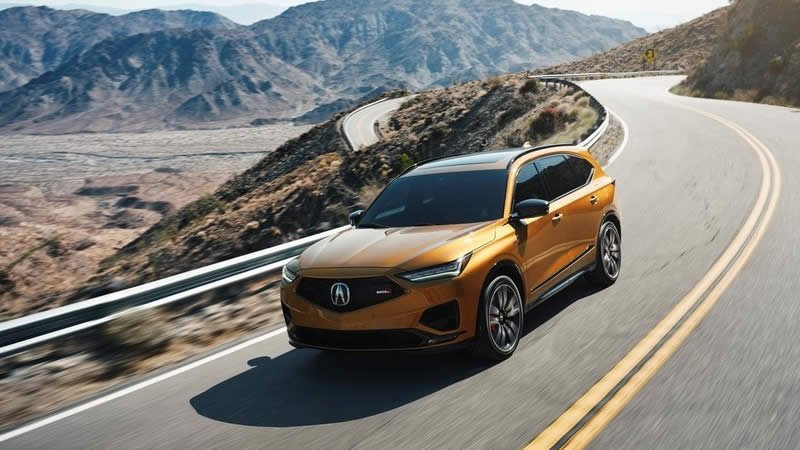 Acura revealed more details about the first MDX Type S, as the most powerful, most maneuverable, and most generously equipped Acura SUV. The 2022 MDX Type S, a high-performance variant of the new Acura flagship, will be hitting Acura dealerships across the country this December, with prices ranging from the high $ 60,000 range.

The MDX Type S advances the essence of Precision Engineered Performance, with significant enhancements to all elements of the driving experience and a distinctive visual appearance inside and out. The Type S models were designed for those who enjoy driving with more power and improved handling and braking, without compromising their comforts or everyday driving.

Numerous proprietary design features distinguish the performance variant of the MDX, including a unique front diffuser and open-faced pentagonal diamond grille that increases airflow and allows about 10% more air to enter the engine bay. . For added cooling, side vents surrounding the grille direct air to a sub-radiator on each side of the engine compartment.

At the rear, the MDX Type S features a diffuser flanked on each side by two large round tailpipes. As with the TLX Type S, the MDX Type S will be available in a striking Tiger Eye Pearl paint exclusive to the Type S.

The MDX Type S also features exclusive 21-inch alloy wheels in Shark Gray or Saloon Black with a milled finish on the Advanced Package. The wheels feature resonators to reduce road noise and are wrapped in Continental ContiSeal 275 / 40ZR21 tires, the first self-sealing tires to fit an Acura product.

At the heart of the 2022 MDX Type S is the Turbo V6 engine created exclusively for Type S models. Acura’s new 3.0-liter 24-valve DOHC V6 produces 355 horsepower and 354 lb-ft of torque, with direct injection. and a twin-inlet single turbocharger. Developed by some of the company’s most experienced powertrain engineers, including members of the team that developed the custom-built twin-turbo V6 hybrid power unit for the NSX, this engine debuted in the TLX Type S earlier. of this year. This makes the 2022 MDX Type S the fastest and most powerful Acura SUV ever.

Redesigned to accommodate the added torque of the new engine, the 10-speed automatic transmission is now more robust and shifts faster. Acura’s Super Handling All-Wheel Drive with torque vectoring comes standard. The system, now in its fourth generation, can send up to 70% of engine torque to the rear axle, and 100% of that torque can be distributed to the left or right wheel.

For Type S, the dampers use exclusive valve rates to give the SUV a sportier feel with more feedback in the seven driving modes of the Integrated Dynamic System. In addition to the Normal, Comfort, Individual, Snow, Sport, and Sport + modes, exclusive to the Type S, the MDX Type S features a new lift mode that increases ground clearance by 2 inches to better navigate rough terrain or snow deep. To improve balance and maneuverability, the battery was moved from under the hood to the cargo area.

The result is the best handling and most dynamic SUV in Acura history. A true machine for drivers, it also boasts exceptional ride quality with adjustable height, automatic load leveling, and even programmable parking height.

A new level of Acura craftsmanship

The MDX also offers a new front and rear low-speed braking system that uses sonar-based parking sensors to detect solid objects at low speeds and warn the driver or apply the brakes to help avoid or mitigate a collision. When the vehicle is moving forward or backing between 1 and 6 mph, the system can detect objects in front of or behind the vehicle and assess whether there is a danger of collision. If an object is detected, the system provides visual and aural alerts and applies acceleration and braking control.

As a result, all MDX models, including the MDX Type S, achieve a Top Safety Pick + rating from the Insurance Institute for Highway Safety (IIHS) and are expected to earn a 5-star overall safety rating from NHTSA.

Designed, Developed, and Manufactured in the USA

Oscar Pistorius, Olympic runner convicted of murder, is up for parole