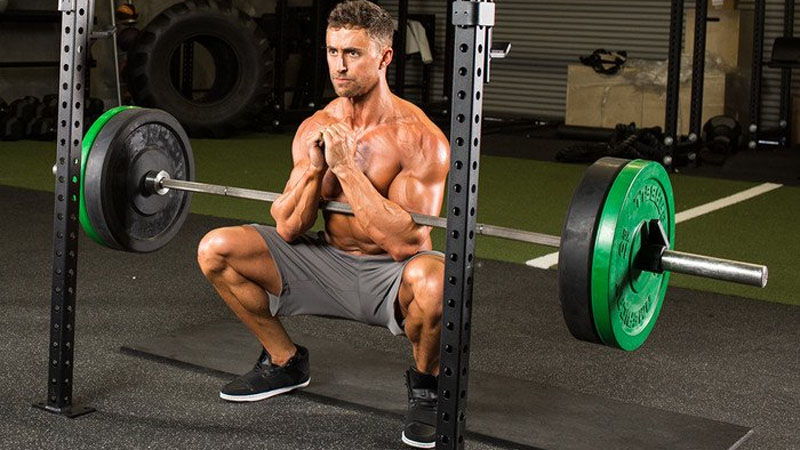 It’s leg day. You’re tired. You’re tempted to take it easy and wander through a few sets of leg press, extensions, and curls. Sure, you could attack those exercises with sufficient intensity and make short-term progress. Eventually, though, your development will get top-heavy and you’ll be the guy stuck in sweat pants, hiding your peg legs. Real men and women—the kind with bulging quads and hanging hamstrings—can pull off short shorts.

This one’s for you, brothers and sisters in the sweats. Over time, we tend to get into a training groove. We hit the same exercises with the same intensity, so our progress slows, crawls, and eventually stops. Don’t get comfortable; get uncomfortable! Try some new exercises—like the five leg legends below—to challenge your patterns and kickstart new gains.

This is one of my favorite all-time movements, especially for strength athletes. Zercher squats eliminate many of the problems that immobile people have with back squats. I’ve seen shoulders so jacked-up that people can’t get their hands on the bar when squatting. Bad hips, weak hamstrings, and a bad back can all contribute to complications with back squats. The Zercher is a great alternative while you fix your jacked-up crap.

It heavily recruits the upper back and posterior chain, is relatively easy on the spine, and the bar position makes it simple to squat correctly. As you start, you may find cradling the bar to be uncomfortable. There are a couple of solutions to this—along with sucking it up, of course. You could use a thick bar, such as a strongman axle. The increased surface area will radically reduce the discomfort. You could also use a barbell pad, such as those the weak might use during a back squat. Regardless, rotate the Zercher squat into your program. It’s fantastic.

A single-leg squat not only adds a limited amount of instability to your squat (more similar to what you would see on an athletic field than a two-legged squat), but also allows you to train with a lighter load. This has its place, like when you want to give your spine a break from those disc-crushing poundages. It’s easy to get someone doing this movement correctly with intense loads, and injuries are unlikely.

That makes a rear-foot-elevated split squat a great addition to any program. The most common issue with the split squat is incorrect placement of the front foot. Most will place the front foot too close to the rear, causing excessive knee displacement and potential discomfort. Get more glutes and hamstrings involvement, with less knee pain, by moving the front foot to a position that keeps the knee directly above the ankle. If the movement causes too much of a stretch in the hip flexor as you descend, use a shorter bench or box.

This is a great movement because, unlike some of the more popular calf moves, it keeps the gastrocnemius into a heavily stretched position as it crosses the knee. This iconic movement brings back images of Arnold with several women on his back. If you can pull it off, that is definitely the way to go! But you can use training partners as an external load, use a machine, or set it up with a weight belt.

However you “ride the donkey,” there is one issue you will run into with this movement: the load. Your calves can handle the considerable weight. Whatever load you use, you may not encounter much of a challenge. Don’t write yourself off as an uber-strong badass. Instead, do your calf raises one leg at a time.

This might be the most underrated movement on this list. As good as it is, few gyms carry the proper equipment needed to perform this movement. It’s difficult and requires good technique, which often makes it the odd machine out in commercial gyms. The glute-ham raise hits your entire posterior chain-your calves, hamstrings, and back all contract strongly during this movement.Progressing this heavy-hitting movement will radically improve your squats, deadlifts, and even your vertical jump! Just pay attention to good technique. On a strictly performed glute-ham raise, most people will struggle with only a few bodyweight reps. It is tough.

Rihanna Has Officially Become The Richest Female Musician In The UK

Why Does My Muscle Twitch

Tips on Healthcare for Men