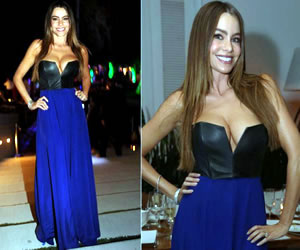 Sofia Vergara’s fiance denies his New Year’s Eve bust up was caused by her posing for a photograph. Nick Loeb was thrown out of exclusive Miami hotspot Story after a heated argument broke out in the VIP area, but claims it was because of club security, rather than his busty lover posing for a photograph with a fan. Nick said problems arose after Sofia wanted to ask a nearby VIP table in the club to back off from their own area in the same section.

Nick attempted to escort the ‘Modern Family’ star to the adjacent table area to address the issue, but security stopped him. He told Access Hollywood: “I was not going to send my girlfriend in there alone. What guy would do that? “So I followed her. The security guys let her in, but not me.” He also pointed out the New Year’s party was hosted by promoter Chris Paciello, who Sofia had dated in the 90s.

Nick says Sofia interfered when security wouldn’t let him over to the table and she was asked to leave the club. In the fracas, the 40-year-old Columbian actress’ breasts were exposed, leaving her embarrassed in front of other revelers and her 20-year-old son, who was also present. An eyewitness at the time said: “In the early hours, Nick got into a dispute with somebody at a neighboring table. Some pushing and shoving started. – Femalefirst

One Direction’s Louis Tomlinson Is Officially A Dad