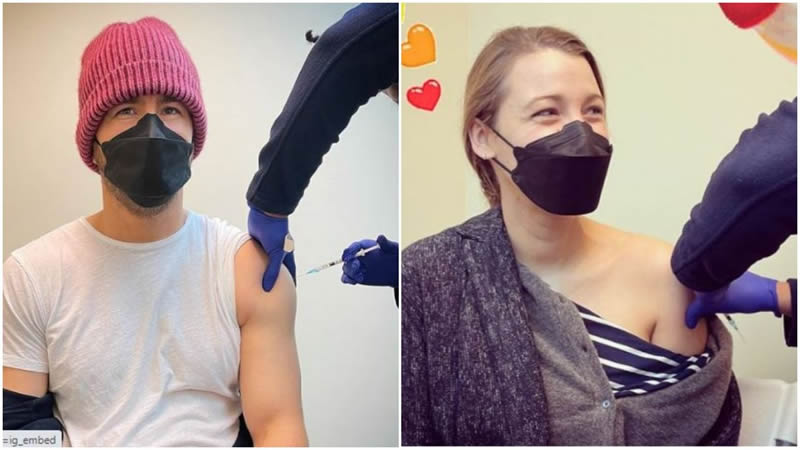 Another day, another dig. Here’s proof Ryan Reynolds and Blake Lively cannot celebrate one single occasion without trolling each other.

The spouses got their COVID-19 vaccines on Wednesday, March 31, and used the long-awaited moment to poke fun at (who else?) their significant other.

Ryan shared a photo of himself in a white tee and pink beanie as a medical professional administered the shot. The Deadpool star captioned the pic, “Finally got 5G.”

However, he used the photo op as a chance to basically #HotorNot his wife of eight years. “Science is sexy. The hat? Perhaps not,” he wrote on his Insta Story of his bright accessory. In another slide, he shared a side-by-side image of both spouses in beanies. Blake wore a blue hat on the set of her 2020 film, The Rhythm Section, not exactly looking red carpet ready, shall we say.

“Who wore it better?” Ryan asked, creating a poll for his followers. (They’re nearly tied at 55 to 45 in favor of Ryan).

Three hours after Ryan’s initial post, Blake got her revenge by offering a subtle dig at the father of her three daughters, James, Inez and Betty. Alongside a picture of herself getting the COVID-19 shot, the Gossip Girl alum wrote, “Find you someone who looks at you like I look at the heroic nurse vaccinating me.”

What about the way you look at your husband? Nope. Obviously, Ryan is out of the picture, not to be mentioned.

She added heart emojis to the pic to really profess her love.

As her Sisterhood of the Traveling Pants co-star, Amber Tamblyn, wrote, “I AM SO HAPPY TO SEE THIS YAY!!!”

Blake and Ryan have really been upping their trolling game lately. Earlier this month, she called out her hubby for not inviting her to set the day that Brad Pitt made a surprise appearance on Deadpool 2.

Four days later, Ryan teased his wife when he watched Green Lantern for the first time and pretended to only just now realize that Blake is also in the film. “Hey @BlakeLively is in this movie!!” the actor wrote in what we can only hope was a joke.

Do they ever keep a straight face at home? We’ll never know.

How Tiger Woods’ Former Wife Made a Fortune After Their Divorce?

Stranger Things star Jamie Campbell Bower speaks about being 7½ years sober: ‘I am so grateful