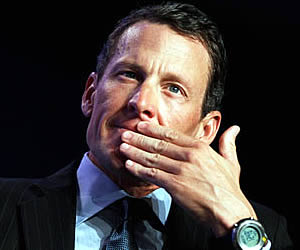 Lance Armstrong admitted it all during his Oprah interview — saying he took banned substances to enhance his cycling performances before all 7 of his Tour de France wins … he blood doped … he took testosterone … EPO … human growth hormone … everything you can imagine.

Lance had denied the allegations for years — and when Oprah asked why he came forward now, Lance replied, “I don’t know that I have a great answer. I will start now by saying this is too late … I view this situation as one big lie that I repeated a lot of times … I am a flawed character.”

He added, “I didn’t invent the [doping] culture, but I did nothing to stop the culture … and I am sorry for that.” Lance said he began using EPO (erythropoietin) — a hormone that enhances red blood cell production — in the mid 90s.

As for how the whole operation worked, Armstrong hedged on the details — saying, “I viewed it as very simple. You had things that were oxygen-boosting drugs, for lack of a better word, that were incredibly beneficial for endurance sports. And that’s all you needed.” He added, “My cocktail was only EPO … not a lot … transfusions and testosterone.”

Lance — who referred to his former self as “an arrogant pr*ck” — isn’t shocked by the outrage over his lies and deceit … saying, “I deserve it.” – TMZ

Penthouse used by Madonna sells as the Most Expensive condo Miami

John Mayer ‘To Propose to Katy’

How to see the last supermoon of 2020