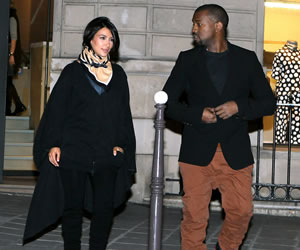 Kim Kardashian and Kanye West have flown to Paris on a romantic babymoon.

The couple – who announced at the end of last month that they are expecting their first child together in June after just nine months of dating – was spotted taking in a number of the city’s world famous landmarks on Tuesday and shopping together. A source told that the 32-year-old reality TV star and her 35-year-old rapper boyfriend are hoping to chill out after announcing her pregnancy, and are planning to stay in Paris “for a week just to chill. It’s a little babymoon.”

The couple browsed the latest collections in designer stores Lanvin and Celine before enjoying a low-key dinner at L’Avenue restaurant. Their holiday follows reports they recently bought an $11 million mansion in Bel Air together, which they are said to have already started developing to fit their needs and are planning to install a gym, movie theatre, bowling alley, hair and make-up salon, indoor and outdoor pool and their own basketball court.

The luxury neighbourhood is already home to stars such as actress Jennifer Aniston and founder of the ‘Girls Gone Wild’ entertainment franchise Joe Francis. Kim and her rapper boyfriend were recently said to have turned down a $3 million magazine offer for the first photo spread of their baby and the reality star has also been offered $250,000 to host pregnancy website. – Femalefirst

King Charles may “exile” Harry and Meghan, why they’re “unimportant” and a...