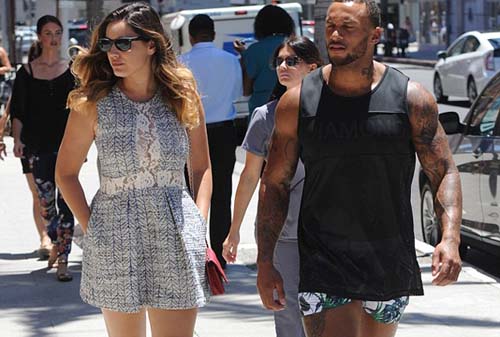 Her regular outings with fiancé David McIntosh have passed without incident during their current stay in Los Angeles – but the familiar script they’ve been reading from took an unexpected twist on Thursday when Kelly Brook found herself the recipient of an unwanted parking ticket.

The 34-year old model and actress was stepping out with her man in Los Angeles, where they’ve been enjoying a prolonged stay over recent weeks. Sporting a blue and white mini-dress with a distinctive sheer lace chest panel, Kelly Brook was in high spirits as they made their way to the city’s popular Urth Caffe in West Hollywood. But her mood was soon dampened as the couple made their way back to their car, with Kelly unable to conceal her surprise after discovering the ticket tucked beneath one of her windscreen wipers After gingerly removing the offending item, she climbed into her car and sped off with McIntosh – a former Gladiator – strapped into the passenger seat.

The previous day they were spotted  leaving a gym in Studio City, California – and the brunette beauty was clearly tickled with David’s rather eccentric choice of gym-wear. Decked in a pair of pleather shorts and a black vest top with had a trim in the same material, the male model seemed to be doing all he could to steal the spotlight from his bride-to-be. Adding a pop of colour to his look, David wore a pair of controversial ‘marijuana leaf’ socks and rainbow coloured Asics trainers. Kelly Brook wore a slightly more conventional ensemble choosing her beloved black leggings with a black and grey vest top as well as some mint green Skechers trainers.

She wore a pair of red sunglasses and shielded her eyes from the sun…. or perhaps from David’s attire.  Considering the presenter’s affinity for keeping fit, it makes sense she’s just landed a contract with shoe company Skechers, alongside American singer Demi Lovato. An excited Kelly took to Twitter to announce the news. ‘So excited to partner with SKECHERSUSA for their new campaign!!! Loving my new kicks,’ she tweeted on Tuesday. Michael Greenberg, president of Skechers, said Kelly was the perfect fit for the campaign.

Kelly has a unique ability to be a glamour trendsetter who also conveys an accessible fashion sensibility that hits right on target with the demographic shopping for Skechers women’s footwear. ‘She’s also the first celebrity we’ve ever featured globally who came to fame outside the United States. As Kelly resonates in Europe and around the world, this partnership is a testament to the international strength of our brand. We’re thrilled to have her on board.’ It’s yet another successful project in the bag for Kelly following her upcoming fashion line and her role in NBC pilot One Big Happy. -dailymail

Oksana Is Saying Mel Gibson Is An Abusive Man