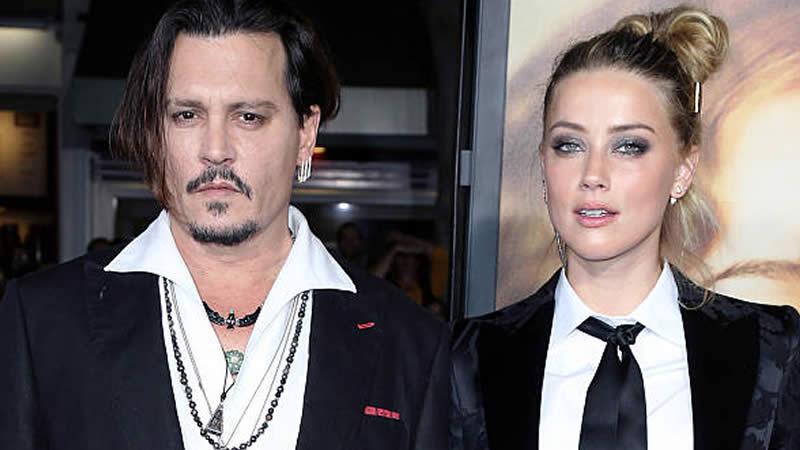 Amber Heard’s one-time friend claimed Johnny Depp said at the time, “We’re married — now I can punch her in the face and nobody can do anything about it”

Amber Heard’s former close friend testified that Johnny Depp joked on their wedding day about being able to freely hit his wife.

The pre-recorded deposition of iO Tillett Wright from January was played in the Fairfax, Virginia, courtroom on Tuesday.

The witness also stated that he became friends with Depp during the movie star’s relationship with Heard and that he had never personally witnessed physical abuse, Daily mail reported.

Under oath, Wright recalled a joke Depp allegedly made on his and Heard’s wedding day back in February 2015: “As we were walking back from the ceremony [to the reception] …

I was walking with Johnny and congratulating him that they pulled it off and they did it, you know. And he said, ‘We’re married — now I can punch her in the face and nobody can do anything about it.’ “

Wright also testified that he had “a lot of discussions” about his fights with Amber, now 36, with Depp, now 58.

“In the very beginning, [Depp] expressed that … he was so in love that it made him feel crazy,” said Wright, who characterized the actor as “paranoid” at times.

“He expressed that he thought she was cheating on him and sleeping with her costars… I said to him, ‘Listen, I know her, I think, pretty well and I talk to her a lot. I think if she was having an affair I would be one of the very few people that she would tell about it.

I don’t hold secrets or lies for anybody, and I would tell you if that was happening so you could make your own decisions,’ “he continued.” ‘But as far as I know, that’s really not the case. She’s really in love with you. And I think that she also is worried that you are having affairs because both of you are used to being sex symbols on earth.

Both of you need to accept the fact that you’re really in love with each other and lean in and be together and love each other.’ “

“And [Depp] told me that sometimes his jealousy would make him feel crazy and outside himself and that he had to get it under control. And that it would cause them to fight,” said Wright.

During his testimony, Depp explained that he has a “dark” sense of humor and that he was “embarrassed” by his language in past text messages read in court.

One message to a friend, for example, showed Depp referring to Heard by saying, “Hopefully that c—‘s rotting corpse is decomposing in the f—ing trunk of a Honda Civic!!” He said he was “not proud” of that.

Depp has also said under oath, “Never did I myself reach the point of striking Ms. Heard in any way, nor have I ever struck any woman in my life.”

He explained that his “goal” in suing Heard for defamation “is the truth,” adding that he hopes to “clear the record” of the domestic violence allegations made against him by Heard.

Heard is suing Depp in response, claiming that he started a smear campaign to portray her domestic abuse allegations as “fake” and a “hoax” staged by her.

The former couple (who met while filming The Rum Diary in 2011) previously revealed their wedding day in court.

Depp said his daughter Lily-Rose, now 22, declined to attend the ceremony because “she and Ms. Heard were not on particularly great terms, for several reasons.”

Heard also alleged that Depp had met up with an ex shortly after their nuptials: “I saw that he had gone to her house after we had gotten married. Upon touching down in Los Angeles, I think it was the next day he went to this woman’s house that he has this sexual relationship with.”

On May 23, 2016, Heard filed for divorce. Heard confirmed in court Tuesday that she brought friend and former costar James Franco over the night before filing. Depp “hated” Franco, she claimed, and Depp testified that he suspected Heard of having an affair with the actor.

Heard explained of that meetup with Franco, “He was my friend. And he lived next door, quite literally next door. And I, frankly, had exhausted my support network with my usual friends and was happy to welcome as much friendship at that time as I could possibly get.”

Keith Urban Says ‘Life Is Very Different’ After Marrying Nicole Kidman and Becoming a Father: “I’d like to stay married”