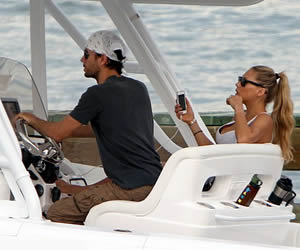 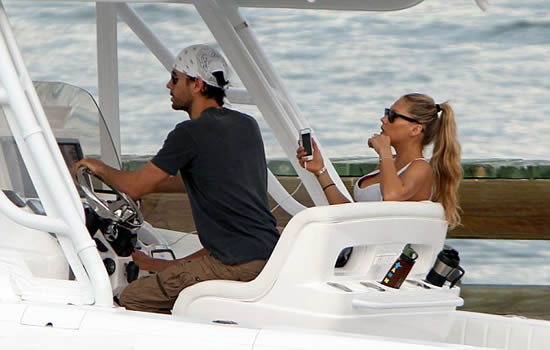 With her blonde beauty and his dark good looks, the handsome couple relaxing on their luxury boat could be a page from a glossy lifestyle magazine. Instead this is just an ordinary weekend for Enrique Iglesias and Anna Kournikov. The Spanish heartthrob spent another relaxing day cruising around the harbour in Miami, Florida with his longtime girlfriend Anna Kournikova on Sunday.

Enrique manned the controls, looking ruggedly handsome in cuffed tan trousers, black T-shirt and white bandana. Anna, meanwhile, hung out looking pretty in a nearly sheer white tank top that exposed her bra underneath, along with grey athletic shorts that showed off her tanned, toned legs. She wore her trademark long blonde hair in a high ponytail and kept her eyes covered by dark shades.

They both went barefoot, soaking in the warm sun and enjoying the sights along the coastal waters. Enrique, 37, even brought one of his three dogs along for the ride, a black and tan German shepherd rescue that Enrique adopted in May and named Lucas. Enrique adores the pup and often takes him for a spin on his jet ski off the Miami coast. At one point, the entertainer showed off his boating know-how by hopping up to the side of the vessel to repair a GPS receiver.

Anna helped out by taking over the wheel while the dog kept watch in the back of the boat. The couple have been together for 11 years but have still not wed, but that hasn’t cramped their style at bit. – Dailymail

Justin Bieber Jets Home to be With Dad During Surgery