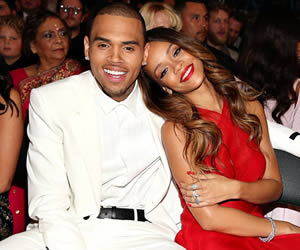 What a difference four years makes. Rihanna and Chris Brown both walked the red carpet separately at the 2013 Grammy Awards in Los Angeles on Sunday (Feb. 10). But once inside the Staples Center, Rihanna (clad in a custom Azzedine Alaia gown, Neil Lane jewelry and Manalo Blahnik shoes) and Brown, 23, happily posed — and cuddled — in the audience.

The night before the 2009 Grammys was a much less peaceful scene for the couple, of course: Brown assaulted Rihanna, 24,  in a high-profile case for which Brown is still serving probation. The couple reunited to much controversy last year. “He doesn’t have the luxury of f–king up again,” Rihanna told Rolling Stone of their much-scrutinized reconciliation. Later on in the evening, Rihanna wowed the crowd with an emotional performance of her ballad, “Stay.”

Not that there weren’t other tensions brewing for Brown at Sunday’s show. The “Don’t Wake Me Up” singer appeared to be the only audience member who declined to stand up when Frank Ocean — beating Brown — won the award for Best Urban Contemporary Album for his debut album, Channel Orange.

Late last month, Brown and Ocean, 25, were involved in a physical scuffle in an L.A. parking lot, with the “Thinkin’ ‘Bout You” singer tweeting about minor injuries. “No criminal charges. No civil lawsuit,” Ocean blogged, explaining to fans why he didn’t press charges. “Forgiveness, albeit difficult, is wisdom. Peace, albeit trite, is what I want in my short life. Peace.” – Usmagazine