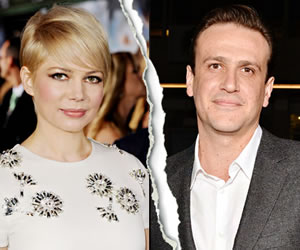 Michelle Williams and Jason Segel are back on the market. The Oz the Great and Powerful actress, 32, and the How I Met Your Mother star, 33, quietly ended their romance earlier this month. Though the two seemed happy together as recently as January, when they were photographed on vacation in Cancun with Williams’ BFF Busy Philipps, an insider tells Us that their romance couldn’t survive the long distance. (Williams lives in New York with daughter Matilda, 7, while Segel is based in Los Angeles, where his CBS sitcom is filmed.)

Us Weekly broke the news of the couple’s undercover romance in March 2012. In June, a source told Us that Williams and Segel were “totally in love. Jason is obsessed with Michelle.” He had also taken a liking to his girlfriend’s daughter (with her late ex, Heath Ledger). “He’s been doing all sorts of ‘dad stuff’ with her, like drawing and playing music,” the insider said.

The stars kept a relatively low profile throughout their relationship, rarely acknowledging the romance in public. Segel spoke vaguely about Williams last April, telling Extra, “I think we would just very much like to be happy. That’s all I’m going to say about it.”

Ashton Kutcher Cheated on His Wife

R. Kelly ‘almost’ gets stabbed with an ink pen in prison by ‘violent’ inmate