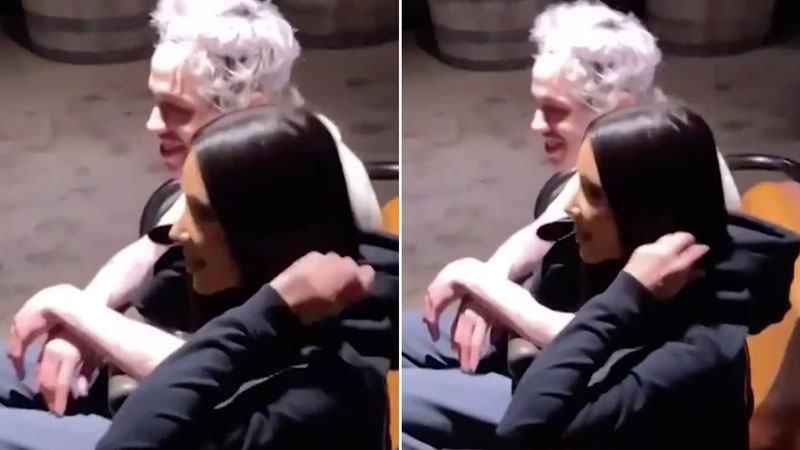 Kim Kardashian and Pete Davidson had a great time with a group of friends for some Halloween fun this week.

The trio then proceeded to the park’s rollercoaster, where Kardashian and Davidson were photographed riding the thrilling ride hand in hand. The two also closed their eyes in the middle of the voyage, as seen in a photo obtained exclusively by People.

Davidson and Kardashian worked on a “Saturday Night Live” episode that the Skims founder presented earlier this month, however, it’s unknown why Davidson sat next to Kardashian.

According to People’s sources, rumors associating the two romantically have been refuted. Machine Gun Kelly is good friends with both Davidson and Barker, thus they must know each other. As a result, Barker may have asked Davison to the night out.

“They’ll run into each other from time to time because they hang around in the same circles.” “It’s just mates hanging out,” a source close to Kardashian and Davidson told People.

Kardashian and her friends were treated like celebrities while visiting the park, according to an eyewitness who witnessed the group, as they were allowed to skip the lines for the rides.

The celebration lasted until 1:20 a.m., with one eyewitness describing Kim and Pete as “excellent friends” when they were spotted together.

According to the insider, Kardashian kept a low profile throughout the outing and was “very relaxed” the entire time.

According to TMZ, Kardashian and Davidson aren’t dating and have been friends since before the “Keeping Up With the Kardashians” star’s “SNL” performance.

According to the same sources, Kardashian did not invite Davidson to the night out. Kim and the others are said to have been invited to join Kourtney and Barker for the Halloween escapade.