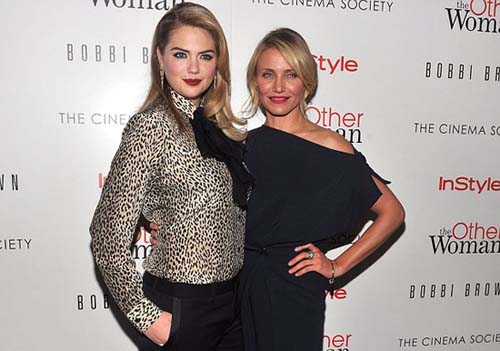 On Monday they both dazzled at the Los Angeles premiere of their new movie The Other Woman in cleavage-baring strapless mini-dresses. But on Thursday Kate Upton and Cameron Diaz were covered up at a screening of the film in New York.

Kate Upton in particular had every inch of her famous figure under wraps in an animal print blouse with a black pussy bow, along with black trousers and silver pumps. The Sports Illustrated model, 21, went for vampish make-up with heavy eyeliner and deep red lipstick, apparently keen to show a more serious side to herself now that she is acting. Meanwhile Cameron Diaz picked a blue mid-length asymmetrical dress which left one shoulder on show.

The 41-year-old actress lengthened her already very long legs in nude court shoes and completed her look by applying a slick of bright pink lipstick and tying her platinum blonde locks into a messy updo. It was their co-star Leslie Mann who wore the most daring outfit of the three for the event, held at the Big Apple’s Paley Center. The Knocked Up star, who is married to Judd Apatow, sported a racy black and white striped peplum corset top.

Leslie Mann, 42, teamed it with cropped black trousers and striking platform shoes with gold spikes on them. Taylor Kinney, who also stars in the comedy, was at the screening too, as was Matthew Modine of Dark Knight Rises fame. Meanwhile pregnant Doutzen Kroes looked positively radiant while showing off her blooming baby bump. The Victoria’s Secret model wore a black cut-out dress which allowed her to flash some of her burgeoning belly, and also had a split up one side.

Doutzen, 29, stole the show from the stars of the movie, completing her look with very high heels despite having a baby on the way, and styling her blonde tresses in a ponytail. Smash star Megan Hilty, who announced her pregnancy last month, and her husband Brian Gallagher turned up dressed down in leather jackets. Gayle King, business magnate Russell Simmons and Belarusian model Maryna Linchuk rounded off the guestlist of stars watching The Other Woman, which will be released in the US on April 25 and came out in the UK on April 23. The movie follows three women who team up to exact revenge after realising they are all seeing the same man. -dailymail