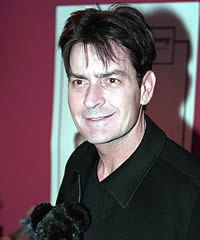 Yes, quite surprisingly the man who never apologizes, Charlie Sheen has issued a sort of apology to co-star Jon Cryer for calling him a “troll”.

Charlie sheen says, “I’ll apologize to Jon right now, I was in a mood, and I threw that out there. It’s a half apology — it’s an apol!”

Charlie Sheen also confessed that “I’m really starting to lose my mind. I’m ready to call anyone to help” and admitted many of his verbal outbursts.

Shakira Carries Her Son At The World Cup Final

Lea Michele Thanks Kate Hudson For Her Support

Kevin Hart had tough conversation with daughter after cheating scandal