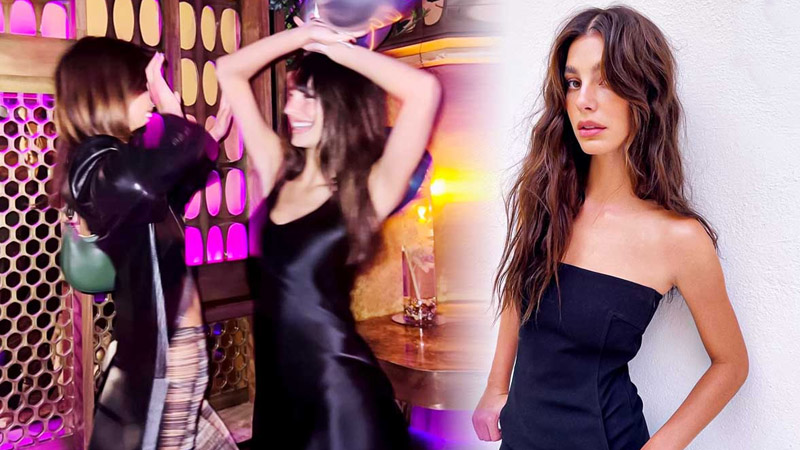 Days after Camila Morrone and Leonardo DiCaprio’s split made headlines, the model celebrated Kaia Gerber’s 21st birthday by dancing the night away and smiling from ear to ear.

Camila Morrone isn’t going to let a little heartbreak get in the way of having fun.

Less than a week after breaking up with Leonardo DiCaprio, the model was spotted having fun with pal Kaia Gerber, who celebrated her 21st birthday on September 3.

In an Instagram Story photo, Kaia and Camila were seen with wide smiles as they danced the night away at sunset in Los Angeles.

Camila dressed down for the special occasion in a black curve-hugging slip dress with spaghetti straps. She also showed off her new haircut and fringe bangs, opting for an easy wavy hairstyle. Kaia wore a black leather jacket with multicolored pants and a similar chic look.

This isn’t Camila’s first outing since she and Leo, 47, called it quits after more than four years of dating.

On August 31, the Mickey and the Bear actress was photographed shopping in Malibu and looking at apartments in Beverly Hills with a friend. She wore a black sundress with ballet flats and a black tote bag for the afternoon outing.

Although neither Leo nor Camila have publicly commented on their breakup, a source previously told E! News that “distance played a factor” and their relationship simply “ran its course.”

The runway model and Oscar winner, who first sparked romance rumors in December 2017, were last seen together on July 4th, enjoying a beach day in Malibu.

Leo and Camila avoided discussing details about their personal lives throughout their relationship. However, in a rare interview with the Los Angeles Times in December 2019, Camila addressed the controversy surrounding her and Leo’s age difference, a nearly 23-year gap.

“There are so many relationships in Hollywood—and in the history of the world—where people have large age gaps,” she told the publication. “I just think anyone should be able to date who they want to date.”

She acknowledge that she “would be curious about it too” from an outsider’s perspective, but added, “I understand the association, but I’m confident that will continue to slip away and be less of a conversation.”

‘Note Before I Die’: The Note 27-Year-Old Woman Wrote Just One Day Before Passing Away From Cancer Has Now Gone Viral