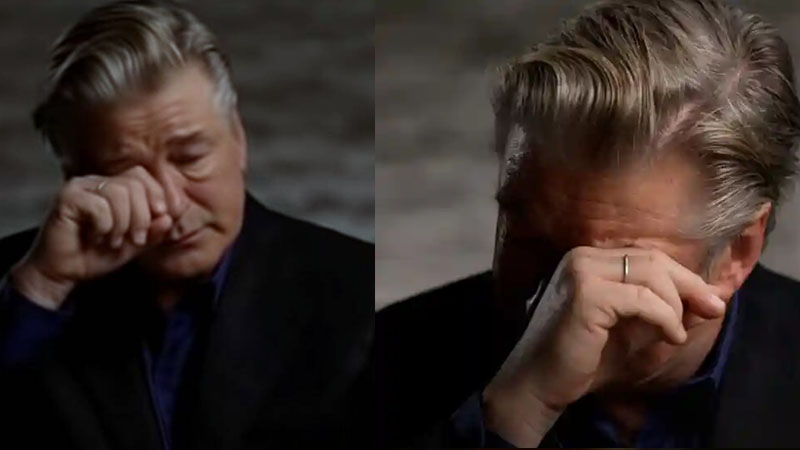 Alec Baldwin breaks down during an interview with George Stephanopoulos. (Photo: Screengrab/YouTube)

Alec Baldwin has denied pulling the trigger of the gun that killed a cinematographer on the set of his film Rust, in his first in-depth interview since the shooting.

Halyna Hutchins, 42, was killed in October when a prop gun held by Mr. Baldwin went off during filming in New Mexico.

The bullet hit Joel Souza, the director after it passed through Mrs. Hutchins, a married mother of one who died on the way to the hospital.

According to police records, Mr. Baldwin was told by an assistant director that the gun was safe when it was given to him during rehearsals.

The 63-year-old spoke with journalist George Stephanopoulos in a preview released by ABC News ahead of Thursday evening’s show.

Mr. Stephanopoulos said: “It wasn’t in the script for the trigger to be pulled.”

“So you never pulled the trigger?”

Mr. Stephanopoulos asked: “How did a real bullet get on set?”

A member of the film’s crew is suing Mr. Baldwin for the fatal shooting.

He claims that the bullet that killed his close friend just missed him and that he held her head as she died.

Mr. Baldwin was filming Rust, a Western film, near Santa Fe when he unintentionally shot Ms. Hutchins, a well-known cinematographer.

Following the tragedy, Mr. Baldwin told the paparazzi that production would be unlikely to restart.

He also stated that he is “extremely interested” in efforts to limit the use of firearms on film and television sets.

He stated that he had met with Ms. Hutchins’ husband and son but declined to provide further details.

He previously told paparazzi: “The guy is overwhelmed with grief – there are incidental accidents on film sets from time to time but nothing like this, this is a one in a trillion episode.

“So, he is in shock… we are in constant contact with him because we are very worried about his family and his kid, and as I said we are eagerly waiting for the sheriff’s department to tell us what their investigation has yielded.”

A Catch-Up Stimulus Check For Some: Are You On The List?

Miley Cyrus: I Am Not a Slut!