It’s a timeless look, which Atalante carries off with aplomb. She also benefits from significant presence, with her deckhouses and capping rails in glistening teak brightwork and mirror-polished stainless steel fittings, superyacht symbols of luxury. But it is the lines we are drawn to, which hark back to classic yachts of the 1930s. And the Truly Classic certainly hooked Britain’s foremost sailor. I recall an interview with Sir Ben Ainslie years ago when he was asked what his dream yacht would be. “A Truly Classic,” he replied. How nice it must be, I thought, to have such a clear vision of your ideal boat. And it goes to show what a bit of hard graft, a few medals and a knighthood can do – Sir Ben is now the proud owner of a Truly Classic 65 called Rita. 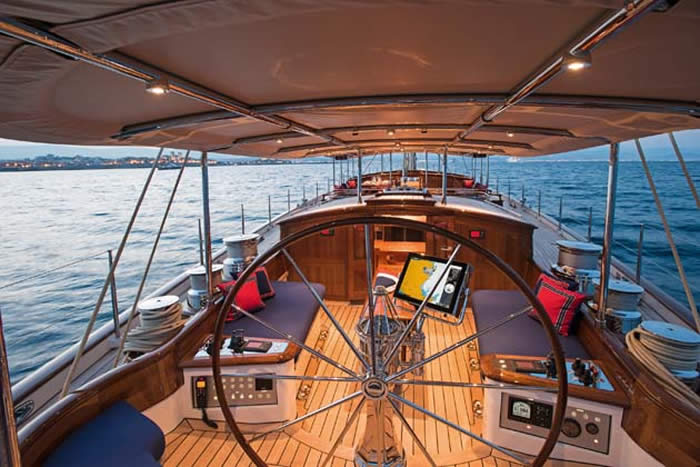 Piet van der Weide from Hoek Brokerage was aboard with us on our trial sail of Atalante and described how Sir Ben knew exactly what he was after when he sold him the boat. “Ah, but he shouldn’t have gone for in-mast furling,” Atalante’s skipper, James Prince, remarked. Readers may recall the stir it caused in the press when Sir Ben and Lady Ainslie were pictured on Necker Island with Sir Richard Branson after being ‘rescued’ from their yacht. Their in-mast furling mainsail had reportedly malfunctioned. I looked up at the 164ft (50m), four-spreader carbon rig above us. Atalante is almost twice the size of Sir Ben’s Rita, yet she has a fully battened stackpack mainsail that nestles neatly into a Park-Avenue boom.

This is about the largest size of yacht where this reefing method is still a practical option with minimal crew, but it indicates a yacht that is designed to be as rewarding to sail as she is to look at. For example, the sizeable single wheel is situated right aft. An aft wheel means minimal cable linkage to the carbon rudder, rewarding the helmsman with a direct feel, plus the sight of around 115ft of pristine deck ahead. The owner of Atalante was very clear about her specifications, as she succeeds his Truly Classic 90 of the same name. He wanted a larger, faster yacht with more comfortable accommodation, but he didn’t want to lose any sailing pleasure when scaling up, skipper James Prince explained. 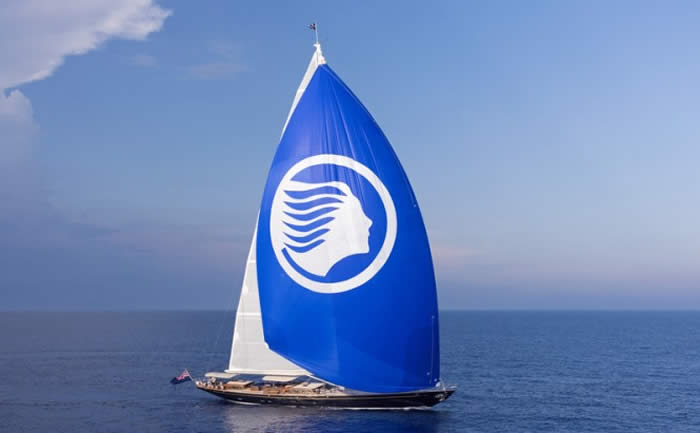 The fact that Atalante handles and accelerates so well was a pleasant surprise. Take the wheel and you really do still feel connected to the sailing. I had an hour of helming her, during which time we matched the 9-11 knots of breeze close reaching. She felt fantastic. I’ve helmed a number of big yachts on which the sensation is lost through complicated hydraulic linkage. Atalante, however, is a treat. You can sense the slight pressure increases. Turn the grand wheel slightly into a lift and the spoon bow responds gracefully. “The big worry with moving up 35ft was that there would be a disconnection from the sailing,” said Prince. “But we don’t have that at all. She feels really similar on the wheel, but the difference is in her greater speed. She will match light winds – so we can do 9 knots in 9 knots, not 7 in 9 as per the old boat [TC90].” Atalante’s designer André Hoek explained how they did a lot of optimisation work. “The owner enjoys the superyacht regattas, hence she has carbon rigging, carbon mast, 3Di sails and a nice keel with thin chord and relatively deep draught,” he said. Attention was focused on performance and weight distribution. The anchor chain is led aft to a deep locker halfway along the foredeck to get weight aft. The Reckmann furlers are recessed into the deck to maximise the luff length of the foresails.

And the staysail can be removed completely, including the foil, and substituted for a blade jib for racing. An ECsix carbon inner stay can be connected and tightened using a ram. The main differences on deck from the old Atalante are that the captive winch for the mainsheet is now below decks rather than in the boom, the standing rigging is ECsix, not metal rod, and halyard and reef locks are used inside the mast. Sailing systems on Atalante are all led to the aft keyhole-shaped cockpit. This makes it a busy, yet compact area to sail her from. The big wheel means you can steer from the coamings either side. From here the telltales are not visible, but there is a clear view forward over the low deckhouses. Three giant Lewmar winches each side control the sheets and running backstays. These are in polished stainless steel to match the custom binnacle, each with remote foot pedal controls – the primaries are size 122 four-speed. “Lewmar did a fantastic job on the winches,” Prince enthused. “The ability to backwind them is such a pleasure as you can take half the load off really smoothly and safely.” 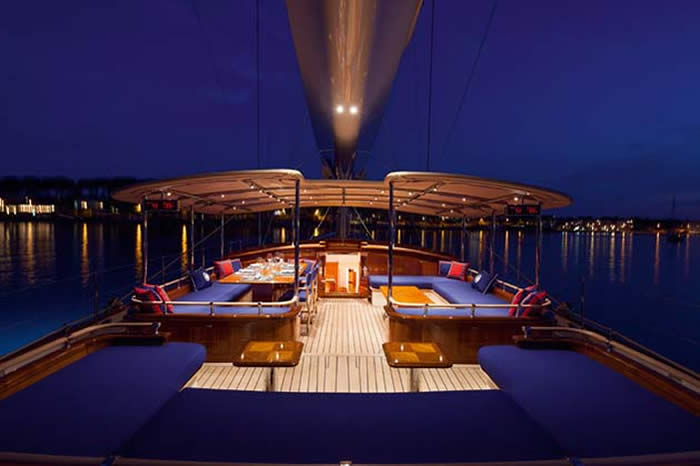 If there is one area that shines, it is the engineering. “This is the project we are most proud of,” Claasen’s sales director Joachim Kieft told me – quite something from the spokesperson of a yard that built the J Class Lionheart. “I’m 100 per cent convinced that this is the best boat yet for corrosion resistance,” he said. He explained how Claasen put a Delrin flange under every metal bolt, the stanchions are bedded into glassfibre insulators and chainplates are set into epoxy. “Different materials should not connect at all. The difference will be apparent in four years’ time. Atalante is designed for lifetime use.” They went to great lengths to ensure the engine room is well set-up for maintenance. The full-beam compartment lies below the deckhouse and includes an air-conditioned control room, accessed via the day heads. The engine room also has an emergency access, where a fuel hose is neatly mounted for refilling the diesel-powered Williams jet RIB. “This boat sails worldwide so a basic engineer or electrician should be able to fix problems,” said Kieft. For instance, the Scania engine was chosen for its manufacturer’s global support and because the engine reputedly has the best torque to rpm figures. A 30kWh lithium-ion battery bank allows silent sailing for up to eight hours.“The systems in particular need to be user-friendly,” Kieft said.

“The only thing our clients can’t buy with money is time.” Atalante’s skipper James Prince praised the yard’s engineering: “Their mechanical, electrical and hydraulic installations are awesome.” Claasen Shipyards owns the aluminium fabricators Bloemsma, where many superyacht hulls are built, including four J Class hulls so far. “We have built 30 Hoeks now, so we are Hoek specialists,” Kieft said. As the first in a new series, the Truly Classic 127 has a flexible design, a customisable foundation for future owners. She is available as a sloop or ketch, with fixed or lifting keel, and with twin wheels forward of the deckhouse or a single wheel like Atalante. And the saloon can be situated either aft or forward, switching with the guest cabins. I appreciated the unusual layout on Atalante, whereby the aft owner’s cabin is linked to both the aft navigation wheelhouse and a full-beam lower saloon – perfect for privacy. “The big difference we have found to the old boat is the privacy gained from having the galley and crew mess separated forward,” said Prince, highlighting how this privacy works both ways. The TC127 still sleeps the same number of guests, but offers more comfort for all aboard.