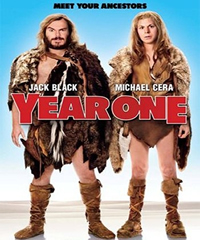 Jack Black and Michael Cera team up in the epic comedy that came out a couple of years ago. We do realize that with every arduous day at work with little time to spare over the weekend, a comedy movie is perhaps just the key and for a night of great laughter I advocate that your next movie purchase or rental must be ‘Year One”

Zed (Black) and Oh (cera) embark on a Biblical journey from their village where they are hunters and gatherers when misfortune strikes not only chaos but enhances Zed with superstitious powers which is the storyline for this movie.

As they leave the village, Year one encompasses innumerable experiences that exhibit a multitude of cultures put together in one of my favorite comedies of all time.

The title Year One tells of how the ideology of what would have happened in prehistoric times like that of a cave man, and metaphorically defines the beginning of the world.

Although the movie, Year One is rated PG-13, I consider it to be a fun filled watch with tones of humor that stimulate all levels of intellect and eradicate boredom like any forms of television entertainment.

Year one not only managed to cast one of the best movies that Hollywood has to offer. Zed and Oh’s starts from an interaction with Kane and Able and the evolution of mankind but is a quest for the two venturing in to the wild to discover the world in an age that we never thought could tingle our laughing muscles.

Although the movie came out in 2009, Harold Ramis managed to gain quite a prominent spot with this block buster. Although I’m not the biggest movie fan who would watch a movie over again, I wouldn’t lie because it took me half a dozen times to make sure I knew the entire script by heart.

If you’ve had a hard day at work and want to chill out the evening with a pint of beer then I’d suggest you call over your buds and make sure that the movie that you’re watching is Year One.