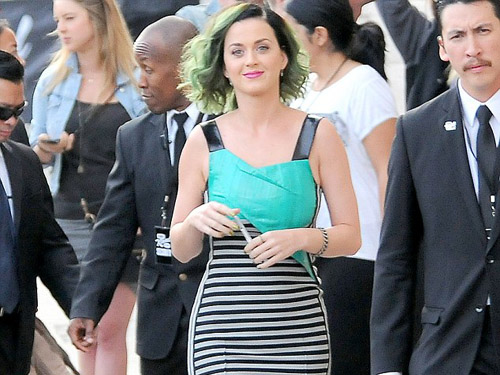 Katy Perry didn’t have to don an outlandish ensemble to create a roaring appearance on Monday. Instead, the 29-year-old pop star tamed down by donning a streamlined look that highlighted her tiny waist as she visited the set of Jimmy Kimmel Live in Hollywood.

The Dark Horse hitmaker – who seems to have shed the pounds in recent months – accentuated her svelte shape in a form-fitted black-and-white striped dress that stopped below her knees. Matching her crayon-coloured hair, the hot sleeveless number – that featured leather-like black straps – was decorated with green fabric over her chest. Katy Perry paired her dress with black pointed-toe pumps and sported a magenta pout.

The Teenage Dream singer was more than happy to greet fans before she made her guest appearance on the talk show. Katy Perry was sure to discuss her lyrics music video for her hit song Birthday, which she recently launched. Though she has a history of extravagant video concepts, the star insisted via Twitter: ‘the video Birthday is the most insane one I’ve ever done.’

Katy Perry rplit from her on/off beau John Mayer in February, and appears to have thrown herself into her music. On Friday, she performed for the CMT Crossroads in Culver City. The songstress joined Kacey Musgraves as they took turns performing renditions of each other’s songs for the televised special event. The Country Music Television Crossroads is a special event where country artists take turns exploring new musical territory with musicians from other genres. -Dailymail